When my law school and the United States Attorney’s Office of the Southern District of Georgia initiated the Street Law Program, I don’t think anyone could’ve imagined the success it would bring. The program was brought to Savannah because of the violence and crimes in our community with the goal of empowering high school students to take control of their lives through education and beat the status quo. By learning the law, students gained knowledge that they could apply to their everyday lives after school.

The first semester of Street Law was a little rough since none of the law students have taught high school students before. We were more mentors than instructors during the first semester, working one on one with students. I was a mentor to high school senior, Jadon – who I will always remember.

I made frequent announcements to the students about college applications, offering help outside of class and reminding them of upcoming fall deadlines. Jadon told me he wanted to look into gaming design at a university here in Savannah, but he wasn’t able to pay for the application fee. When I asked if he wanted me to bring some information in for him, he was reserved at first but said he would appreciate it if I did. The next week I brought him a folder containing information on the gaming major, financial aid, scholarships and application requirements. After I explained all the information in the packet, he was so overwhelmed but thanked me graciously.

Towards the end of the semester, when I checked in and asked him how college applications were going, Jadon replied, “Great! I actually applied to two other colleges.” He told me he still hasn’t been able to pay for the gaming design school he initially chose, but the other two applications were completed and submitted. I still get goosebumps thinking about him, since I only helped him with one application. 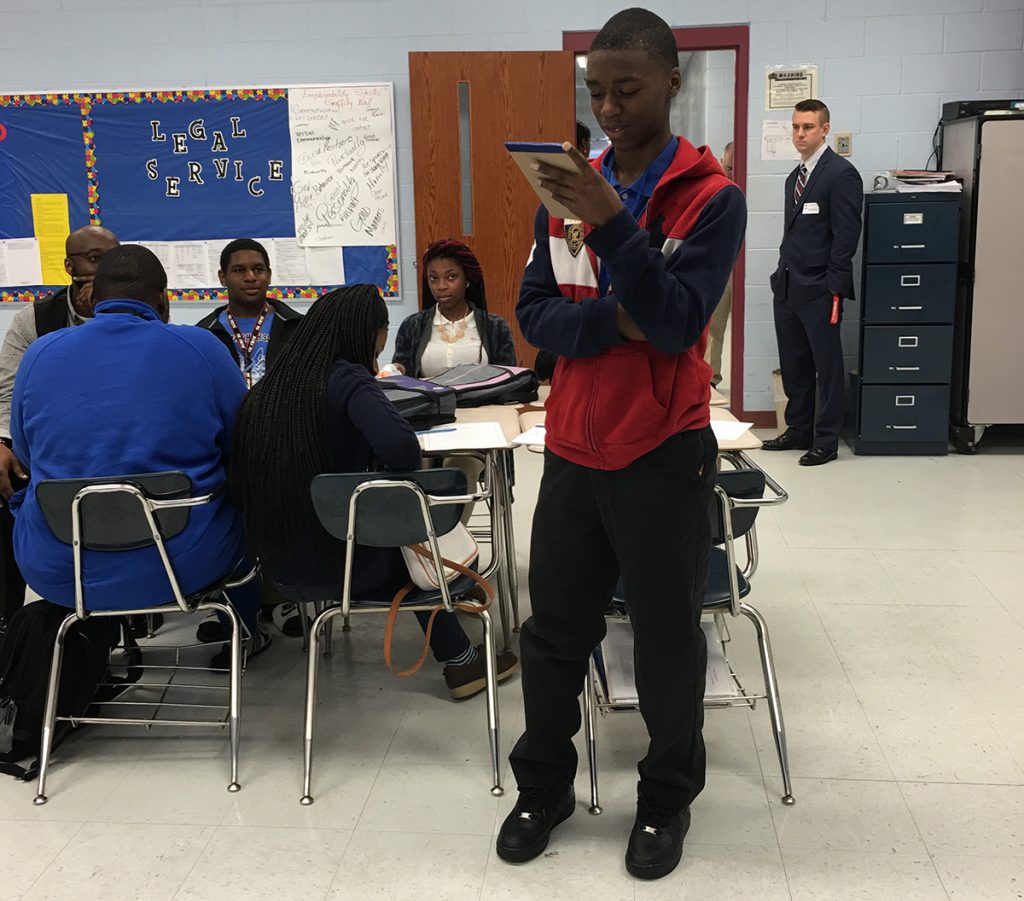 Through this mentorship, I was able to provide Jadon with the basic tools needed for independent learning. I haven’t heard from Jadon since the first semester ended, but I heard he began dual enrollment to a technical college this spring semester. I wish him only the best.

Over winter break, I thought about him and the other students who weren’t able to afford college applications. But further, I thought about the students who are full of potential and could’ve benefited from a mentor. My colleagues and I worked through the winter break to plan for the upcoming semester, trying to figure out how to engage the students and promote participation. That’s when I came across a grant opportunity in the ABA’s Student Lawyer magazine.

The grant program supports Street Law for our public service. I applied for the grant to facilitate the classes since the students were learning dense materials and the law. The ABA Law Student Division worked with me and we were able to get the grant just in time for the start of the semester. My colleagues and I met weekly to plan for each class. At this point, we know what potential looks like, and we wanted to make sure we utilized our teaching time wisely and strategically to reach every single one.

As the semester began, we met the students of my new class and introduced the law student instructors. I told them that I understand spending a couple hours with law students and learning the law can get overwhelming and sometimes boring, so I will bring snacks to each class to help with that. One thing we all agreed about was that no one wanted to end up in the streets after high school and be a stereotype. Something about our persistence in defeating the status quo led them to believe us and persevere too.

So I made a deal with them: In exchange for their willingness to learn and participation, I would bring snacks each week and honor them at an event at the end of the semester – and the rest is history. 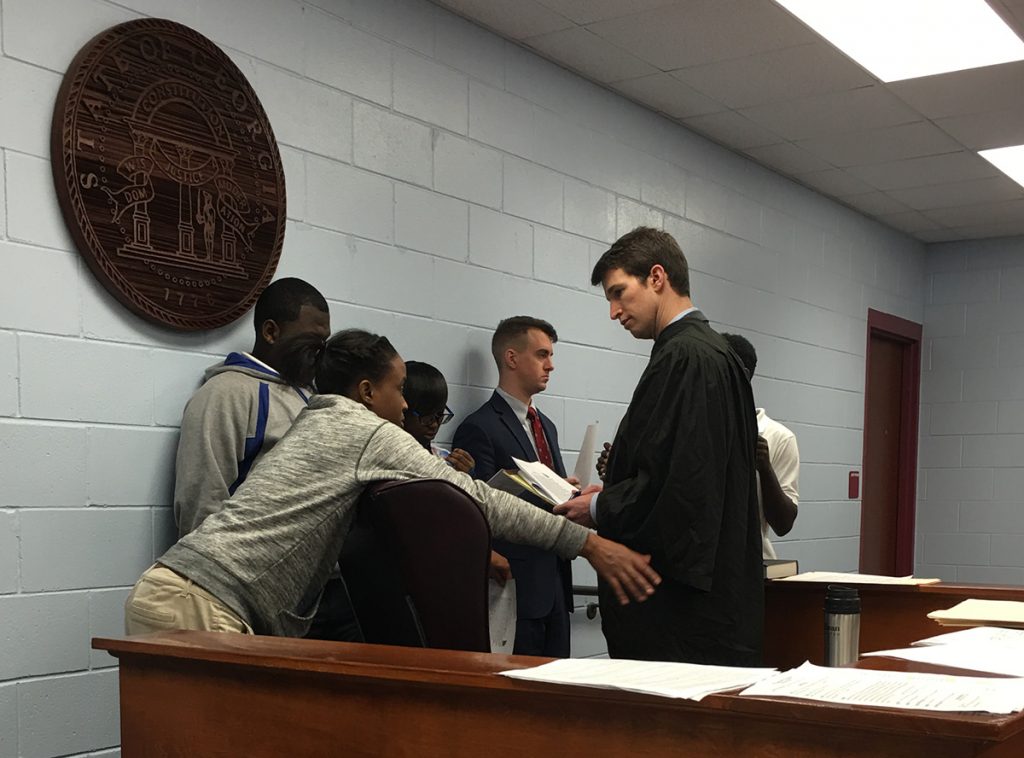 Each class was a success. Students loved interacting with the attorneys, law students, and especially each other. We spent the majority of class time in the in-house courtroom at the high school. We gave students evaluations at the end of each class; the feedback consisted of their experience with the lesson plans and notes, one reading, “No more snacks, you all do too much for us.”

Each week our mentorship and loyalty to each other became stronger. The students participated heavily in every class, respected our cellphone and speaking-over-each other policies, and cooperated for each activity. So much passion came from the students when they knew their lesson materials, so the mentorship we provide encourages them to be confident and independent thinkers.

When it came time for the Street Law Awards Ceremony, I reminded the students, “I’ve followed through on my promise to honor you all at the event. This is your time to thank us and prove to our guests all that you have learned.”

For two weeks the students stepped up to show their knowledge and gratitude. They practiced for two weeks up until the event, sometimes early in the morning or after classes. All the students who volunteered to perform the mock trial did not miss one practice session and were willing to do what was needed, even if it meant defending a client they didn’t believe in (they loved friendly competition between the prosecution and defense).

On the day of the event, everyone was nervous since the news media were coming. The students arrived all dressed up – in suit and tie, beautiful professional dresses, and pearls. We were so impressed and proud that they took their roles as attorneys so seriously. 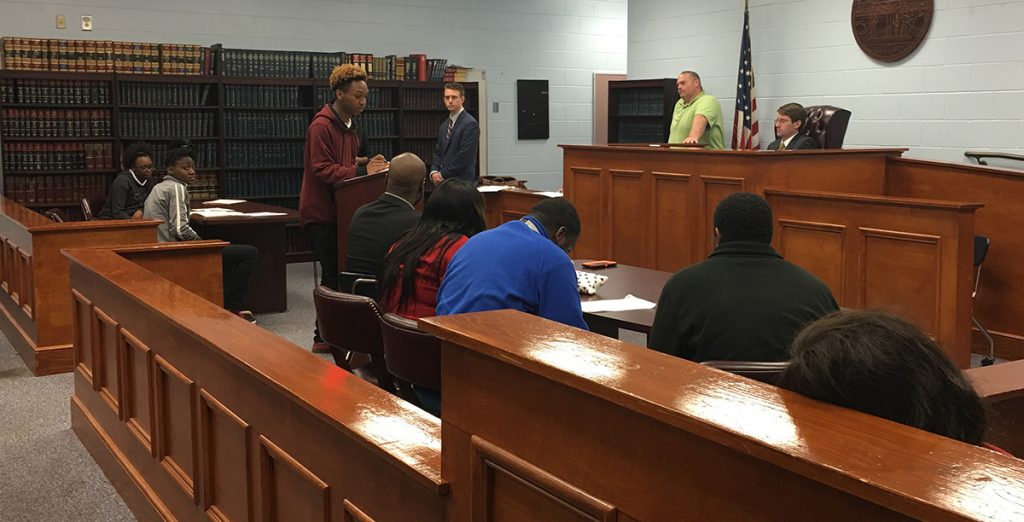 The mock trial turned out better than expected and was recorded by the news media. When the news station asked student Brianna Williams about her performance as a prosecutor in the mock trial, she said, “”I took really deep breaths and I just kept telling myself, I can do it, I can do it. The [mentors] helped me to push myself to do things I don’t usually do, such as speaking in front of people.”

Another student, Anthony, said, “My experience at Street Law was amazing [the mentors] taught me not to be afraid of doing things, like going after a dream I wanted since I was a kid; they also wanted us to be the best we can be in law. It taught me so much about the system and they really cared about what we learned to push us to greater heights. They also said if we needed anything like help with our sat or registration for college to get their numbers or email so that’s was helpful also.”

I can honestly say that I’ve learned more than I’ve taught. The students are brave, resilient, and bright- sometimes they just need a little nudge. The success of Street Law is credited to our mentorship with the high school students, which is reflected in their academic success.

Thank you to Savannah Law School and the United States Attorney’s Office of the Southern District of Georgia for empowering Savannah’s students, whether they are in high school or law school. Most importantly, thank you ABA, Law Student Division for supporting us this semester. We thank you all for this opportunity!