Lawyers like to talk about the law and often do so in social settings, in casual encounters with friends and acquaintances and on social media. It is human nature to chime in when you know something relevant to a discussion. However, in order to avoid the inadvertent creation of a lawyer-client relationship, restraint is a good policy. 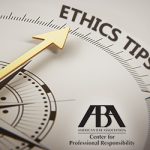 When talking informally with an individual who may have a legal problem, a safe course to follow is to talk in general terms about the area of law, without honing in on the specifics of the individual’s problems. If the discussion becomes too focused, the individual may form a reasonable belief that a lawyer client relationship has been established. See, e.g.Attorney Grievance Com’n of Maryland v. Shoup, 979 A.2d 120 Md.,2009; Bangs v. Schroth 201 P.3d 442, 2009 WY 20, Wyo., 2009. (By talking too much about a friend’s legal problems and making specific statements about what should be done, a lawyer can give the impression that he is giving legal advice thereby creating a lawyer-client relationship.)

Although it can be difficult to distinguish between the two, provide legal information not legal advice and make it clear that you are not offering legal advice. See, ABA Formal Opinion 10-457 Lawyer Websites (2010) for a discussion of the distinction:

If you disclaim that you are providing legal advice then do what you say you are going to do and don’t provide it. If you do provide advice, your disclaimer may not be effective. Again, See ABA Formal Opinion 10-457:

…Limitations, conditions, or disclaimers of lawyer obligations will be effective only if reasonably understandable, properly placed, and not misleading. This requires a clear warning in a readable format whose meaning can be understood by a reasonable person.….Finally, a limitation, condition, waiver, or disclaimer may be undercut if the lawyer acts or communicates contrary to its warning. (emphasis added)

The chapter entitled, “Establishment of Relationship” as it appears at page 31:101 (last updated in 2002) of the ABA/BNA Lawyers’ Manual on Professional Conduct provides the following list of factors that go into making a determination of whether a lawyer-client relationship has come into existence:

“A lawyer-client relationship may be shown by an express contract, or may be implied when “(1) a person seeks advice or assistance from an attorney, (2) the advice or assistance sought pertains to matters within the attorney’s professional competence, and (3) the attorney expressly or impliedly agrees to give or actually gives the desired advice or assistance…. In appropriate cases the third element may be established by proof of detrimental reliance, when the person seeking legal service reasonably relies on the attorney to provide them and the attorney, aware of such reliance, does nothing to negate it.”” McIntosh County Bank v. Dorsey & Whitney, LLP 726 N.W.2d 108 Minn.App.,2007. See State Bar of California Opinion 2003- undated ( nature of duty that arises between a lawyer and a person who seeks her advice depends upon surrounding circumstances, and on person’s reasonable belief as induced by lawyer’s conduct ).

An individual’s belief that the lawyer has undertaken the representation must be reasonable. Berry v. Utica Nat. Ins. Group , 886 N.Y.S.2d 784 N.Y.App.Div.4.Dept.,2009, (unilateral belief of plaintiff that he was client of law firm, as required for claim of legal malpractice, did not by itself confer status of client upon him). Some authorities point out that an individual cannot simply will a lawyer-client relationship into existence simply by claiming he believed it exists, it has to be a reasonable belief. See, e.g. Knigge v. Corvese, 2001 U.S. DIST. LEXIS 10254 (S.D.N.Y. 2001) The court stated, “A party’s ‘unilateral belief’ that he is represented by counsel ‘does not confer upon him the status of client unless there is a reasonable basis for his belief.’ . . .

A number of indicia go to the reasonableness of the client’s belief. The setting of any advice given, whether in a public place or in private, the relation of the matter asked about to the area of lawyer’s expertise, evidence of payment of fees, previous representation of the client, formal consultation in the lawyer’s office, existence of a referral, and whether the lawyer gives general information about the law rather than specific advice directed at the client’s particular situation and questions. Individually tailored advice in itself can be the basis for finding a lawyer-client relationship. See, DISTRICT OF COLUMBIA BAR Opinion 316 (2002)

By the same token, lawyers should be careful in their interactions on social media, lest they create lawyer client relationships through chat room or listserv discussions. Similar questions arise in the analogous world of radio call in shows. See, e.g. ABA Formal Opinion 10-457,Arizona State Bar Op. 97-04 (because of inability to screen for conflicts of interest and possibility of disclosing confidential information, lawyers should not answer specific legal questions posed by laypersons in Internet chat rooms unless question presented is of general nature and advice given is not fact-specific); California Standing Committee on Prof’l Resp. and Conduct Formal Op. 2003-164, (2003) (legal advice includes making recommendations about specific course of action to follow; public context of radio call-in show that includes warnings about information not being substitute for individualized legal advice makes it unlikely lawyers have agreed to act as caller’s Lawyer).