It’s your friend and your enemy. It’s your best selling point while simultaneously serving as an ethical gateway to hell. It can make or break your career. And it’s just 60,000 square pixels.

It’s your basic info on LinkedIn.

Not your total resume – we’ll get to that in the future on the assumption that people read past the highlights in this swipe-left or swipe-right world. We’re only talking about your name, your position, your affiliation, and your smiling face. 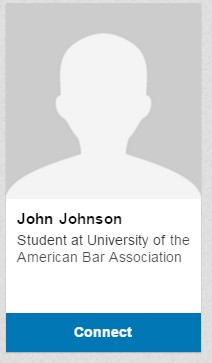 That. Period. When you start getting active on LinkedIn, people will find you popping up in their suggested contacts under “People You May Know.” (That’s how I recruit many contributors for Student Lawyer.) Maybe you’re interning at their firm or attending their alma mater. There’s a limited number of things your potential hiring manager, mentor, or nemesis can do at this point on this screen:

Note that two of the three don’t work in your favor. They could look at your page, sure, but there’s no guarantee. The difference could be one of these things holding you back upon first impressions.

It’s the first thing people see. It’ll also be the last thing if your photo:

Why do I have a section called “your name” in this article? It’s literally one of the first things you learned to say, spell, and type into web apps. You’d be amazed how many people …

Starting off at the outset of your career, this will be short and sweet. You’re a law student or law school graduate seeking … something. That’s totally workaday and acceptable. Just don’t get cute.

And lastly, never use the word “unemployed” in your description. First, it might be seen as implying that someone did indeed unemploy you after hiring you – which begs the question, “what was so wrong that they’re out of a job?” And second, you’re “seeking” or “pursuing” your goal of becoming the lawyer you envisioned when you started out on the road to becoming a lawyer. Show a little of that passion.

The cultivation and care of your personal brand is going to be critical. Like the Titanic on its first voyage, all this can sink you before you even get off the first screen of LinkedIn. Don’t be your own iceberg.