For some people, networking is a highway to the danger zone. How do you enter a target-rich environment, full of people who could help you in your career, and just start talking to them?

For some people, it takes a lot more than just fancy flying around the room to make the right connection.

For some people, they need a wingman.

At last year’s ABA Annual Meeting in Chicago, I got to show a student from the D.C.-area how a networking wingman works. And it’s information you can use at this year’s annual meeting, which is next week in San Francisco – and it’s not too late to come and expand your network!

I saw Raenetta at the President’s Reception at the Art Institute of Chicago by an off-the-main-area buffet station. I walked up to her and asked her if she’d been enjoying her experience. We talked, ate a few hors d’oeuvres. Then, once the plates were clean, she said she wanted to meet people, but didn’t know how to get into a conversation.

I said, “well, let’s get you into one.” And we took off, wingman and networker.

Raenetta mentioned she was looking for the Law Student Division circuit governor from her area. Then, we moved from our corner of the room to a higher traffic area (Step 1). That put us at the bar station, waiting in line near others.

We learned the woman and the person who she was with were in town with the Judicial Division and that she had been presenting on a case that related to gun violence. We listened to her talk about how the topic came about and how the presentation went (Step 4).

Shortly, our small group grew. Raenetta and I were joined by a public defender from Baltimore – which was great, since she isn’t far from there. He showed photos of his office, which had been blocked by an armored police vehicle during the Freddie Gray protests. We introduced him to the Judicial Division rep and told him what she had been doing earlier that day (Step 5).

That began a deeper discussion of the topic. As the conversation continued, I spied three members of the Law Student Division Board of Governors. I flagged them down, brought them over, and introduced them to the others in what had become our own little island in the reception (Step 6).

We continued to talk until it was announced that buses would be leaving for the ABA meeting hotels. Raenetta and I exchanged contact information (Step 7) with our new friends and bid them farewell – and hoped they would find cheesecake  (Step 8).

As we found ourselves on our own again, I looked at her and said:

“Now, what did we learn from that?”

Let’s look at the steps above as a guide on how to be a wingman:

When I got back to the hotel, I  had gotten changed and picked up Shake Shack for dinner (we’d been talking so long I hadn’t eaten much at the reception!). And instead of eating in my room, I picked a spot near the hotel bar. And who do I see?

My new friend from the Judicial Division, which was also headquartered in our hotel.

I thanked her and told her about the wingman experiment. And she introduced me to other members of the Judicial Division contingent.

The next day, the last day of Annual Meeting, the Law Student Division hosted a discussion on student debt. I noticed that Raenetta was there. And when it was done, she started a discussion – with Ayan, the circuit governor she had been looking for. 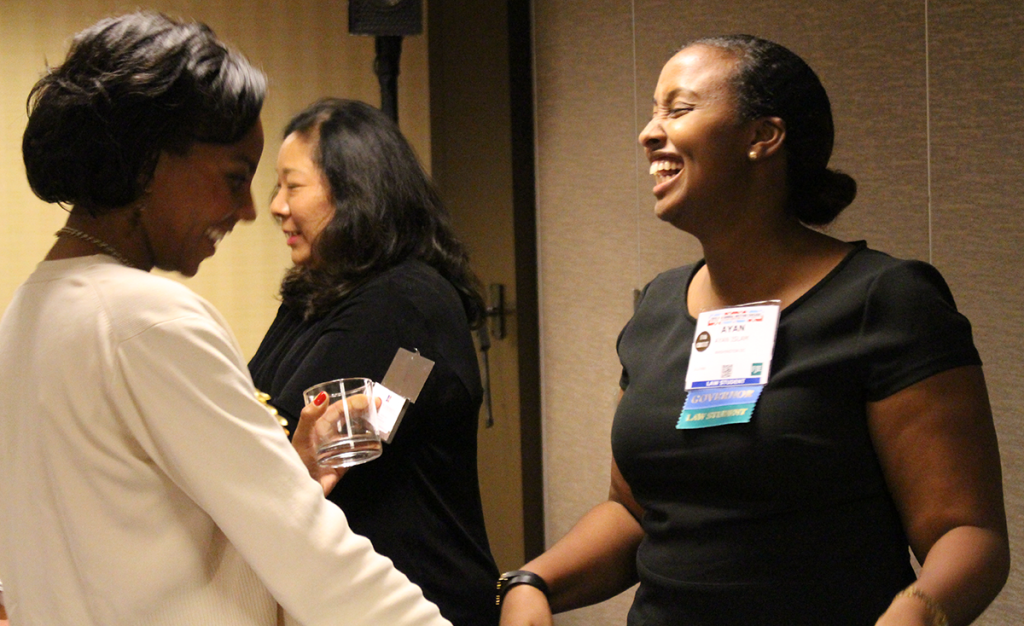 That’s the two of them.

Many lawyers I’ve met claim to be introverts, which I find hard to believe. But there have to be those rare mavericks that make great wingmen and wingwomen.

So if you’re coming to Annual Meeting next week in San Francisco – or are just trying to work the room at a conference, roundtable, or other event – don’t let the pressure of networking take your breath away. Be sure to never leave your wingman.