Paulette Brown, the outgoing President of the ABA, and I had a lot to celebrate on the last weekend of our terms at the 2016 Annual Meeting in San Francisco. One of the many successes we both couldn’t stop smiling about as we danced at the President’s Reception on Saturday night was the passage of Resolution 16-08/01 by the ABA Law Student Division’s national Assembly.

This bylaws reform package, titled the Student Empowerment Initiative, was developed by the Law Student Division Board of Governors over the last two years and was the product of the hard work, negotiations, feedback, and dedication of dozens of law students both who have served and are serving on the LSD board and law students from across the country.

The reform package creates a dynamic national executive board and increases the power and direct participation of the 204 ABA-approved law schools and the 408 SBA Presidents and ABA student reps that represent them.

The plan also lets the division reallocate travel and other costs formerly dedicated to the larger student board.

Eighteen months ago, when I was elected the 2015-2016 Chair of the ABA Law Student Division, the law student membership in the ABA stood at 24,000 students. Today, more than 72,000 aspiring attorneys have joined the association, meaning that we have engaged over 50% of the total of the nation’s nearly 115,000 law students.

Although I was grateful and excited to be elected chair, our division faced a serious budgetary shortfall and an unsustainable governance structure that had been developed in the 1960s and 70s that had not adapted to modern technology that students regularly use today and that businesses regularly utilize in the 21st Century, such as video conference calls and social media platforms.

Our division is on the path towards becoming the best version of itself.

Further, I was only elected by 23 students – the law student board members of the division – many of whom had run unopposed – and, in some cases, had been elected by fewer than five students.

Noting that we were, in fact, not representing, serving, or engaging the thousands of law student members of the ABA as effectively as we should be, a bylaws reform initiative was presented by my predecessor and good friend, Chair Aaron Sohaski, and his team the weekend of my election as Chair-Elect.

At Annual 2015 held in Chicago, a first attempt at reform narrowly failed to reach a 2/3 majority of the full law student national Assembly, losing by just nine votes.

After formally taking office following this disheartening loss, I had to work with our team to pursue the policy initiatives and membership services we had mapped out for our year ahead while also having to deal with a financially uncertain future for our division due to this unsuccessful shot at governance reform.

After exploring what options we had within our LSD Board, the ABA Board of Governors agreed to form a Working Group on Law Students to analyze the serious implications if this issue was not addressed within the year. 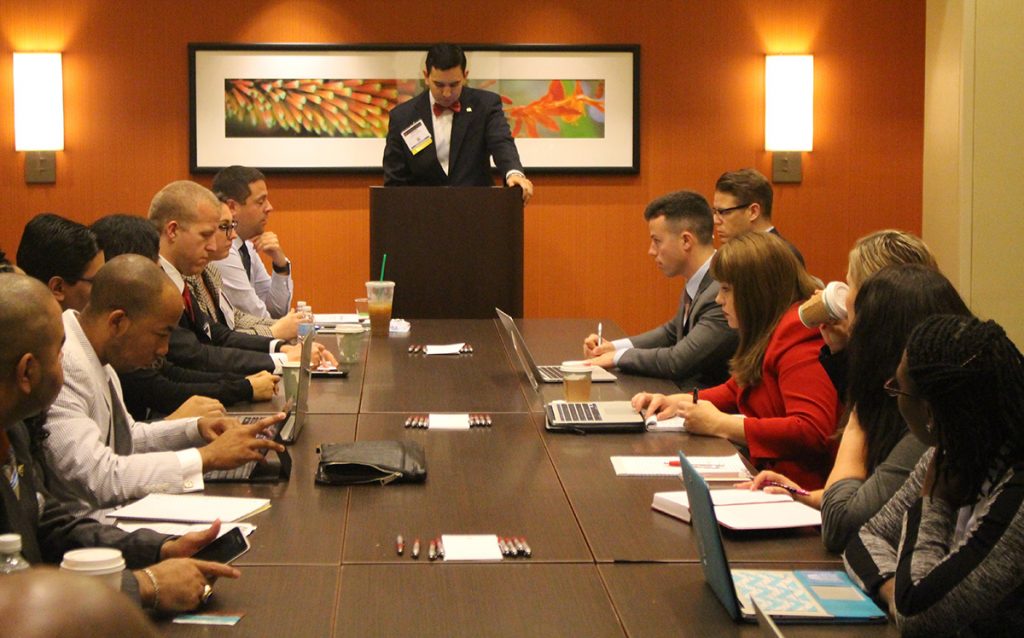 Our board was then given the opportunity to develop a new proposal, which our board did through significant discussion and debate based on the concerns raised at Annual 2015.

In addition to sending more than one draft of the resolution to the voting members of the 2016 Assembly (the 408 SBA Presidents and ABA law student Reps), we hosted an online Q&A session where students were given the opportunity to express concerns and offer their ideas, we provided an online comment board for feedback, and we even shared the phone number of our then Chair-Elect, Kareem Aref, who agreed to be a resource since I was kicking off my bar prep studies.

These requests for input in addition to various deep discussions within our national board led to the following enhancements being integrated into our new bylaws reforms package that centered around empowering more law students more than ever in our division’s history.

1) Direct elections of board members by the entire law student Assembly which means that now 450+ voters can now directly vote for the Chair, Vice Chair, and the three Division Delegates to the House of Delegates (the Delegate of Diversity, the Delegate of Communications, Publications & Outreach, and the Delegate of Programming). The Education Director is appointed by the Council of the Section of Legal Education as deemed by their bylaws, and the Law Student Member of the ABA Board of Governors is chosen through a Nominating Committee as is historically done;

2) Electronic online voting 365 days a year instead of just once a year at the Annual Meeting by the law student Assembly for the first time ever – an important step toward modernity, efficiency, and access to voting for students who face financial barriers or limited school assistance to be able to travel to vote at regional meetings or at the Annual Meeting;

3) The opening of national board committees for all law students, including SBA Presidents and ABA Reps, to join so that they may directly participate in developing national policy and ABA benefits for student members; and

At the online roundtable we made available to law student leaders as an opportunity for feedback about the proposed reforms, we heard a genuine concern about the elimination of the 15 regional circuits that provided 15 regional governors who served on the board. After hearing this concern – which had also been articulated during the first reform effort and at several points throughout the year – we agreed to amend the Student Empowerment Initiative resolution by providing for the creation of caucuses. The ABA utilizes a caucus system at the national policy-making level with its national Assembly, called the ABA House of Delegates.

By giving students a proven and effective option to organize around issues that they care about – including minority, gender, regional, religious, political, and other issues of interest – we believe that students shouldn’t only have the chance to be represented by their geographic identity, but that our division should reflect as many of the diverse passions that law students have as they want. This is a recognition of today’s expressed commitment to diversity that was likely not valued in the same way by the governance system we have been operating under that was developed in the 1960s and 1970s. 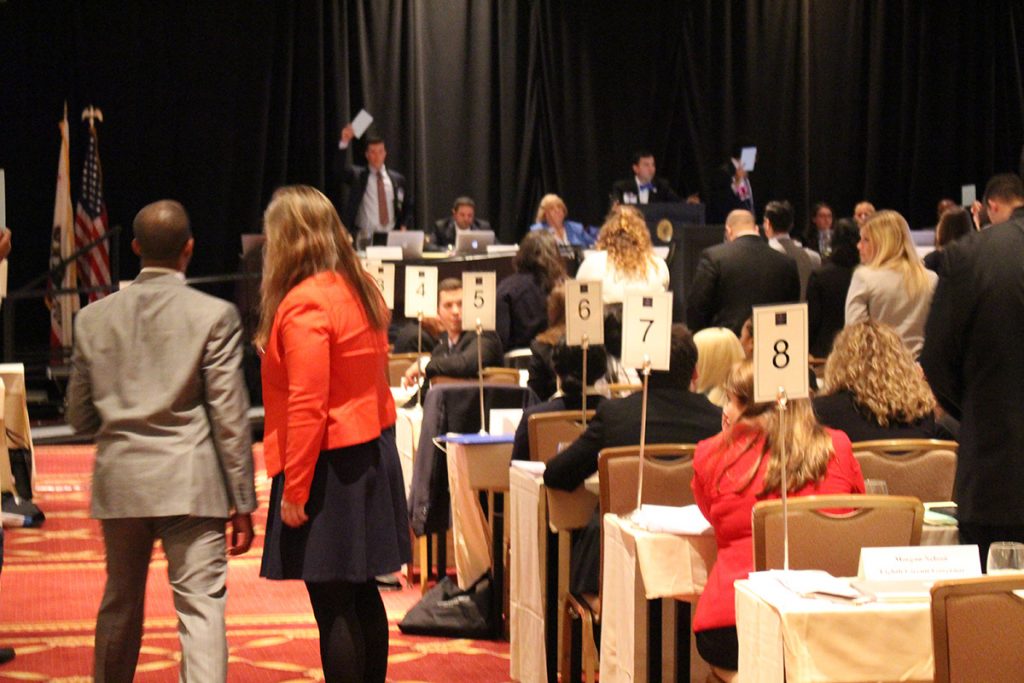 At the August 6, 2016 Law Student Division Assembly, arguments in favor and against the Student Empowerment Initiative were presented. After the initial vote failed to reach the 2/3 majority, the bylaws reform resolution that our team and three student boards had worked on for over two years failed by one vote. When it was announced that the vote count was 109 in favor and 55 opposed, we realized that the measure actually failed by .6667 of a person.

However, in a dramatic moment, a motion to reconsider was proposed by a student delegate who had originally voted against the proposal. As chair, I gratefully entertained the motion, and it was accepted by the Assembly. After a final round of advocacy, the reforms package successfully passed the 2/3 threshold: 113 to 51.

The passage of the Student Empowerment Initiative was the culmination of work that I had personally invested 18 months in developing alongside two national student boards that I was proud and honored to lead. I am ecstatic that we were able to deliver this important and destiny-determining reforms package on the last formal business day of my tenure as chair of the LSD board. This success was the product of a mighty team effort and now gives real power and real access year-round to the nation’s law schools via their SBA Presidents and ABA Representatives that make-up the LSD Assembly, the highest policy-making body of our division.

By passing the reforms, the Law Student Division’s Board of Governors and Assembly boldly addressed its financial viability and empowered students. And that is something definitely worth dancing about!

By developing compelling reforms that reduce inefficiencies and expand the law student voice beyond just 23 students, we are truly enabling our incoming board and my successor to focus on practical issues that really matter to students and to live up to the new official mission statement our board adopted for the division this past spring: “to empower law students to achieve excellence in the legal profession through substantive programming and to advocate on a national scale for policies that benefit law students.”

As I transition from Chair of the Law Student Division to the next chapter of my professional journey with the ABA, I am pleased to say that we are truly leaving it better than we found it. Our division is on the path towards becoming the best version of itself. 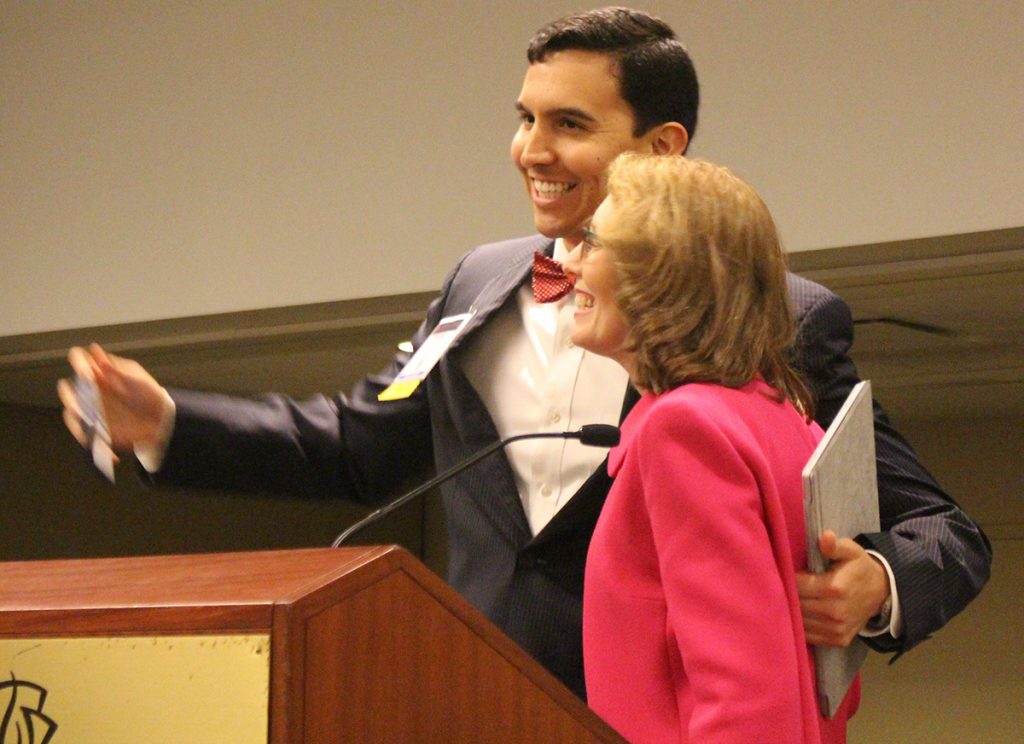 In her remarks to the ABA House of Delegates, new ABA President Linda Klein of Georgia described how together the many members of the ABA were “dance-partners” who worked and performed together to create positive change in the legal profession and our communities.

I am grateful to the many dedicated “dance partners” I had the privilege to work with this past year: our division’s director, our staff, our national board, our executive team, my predecessor, my successor, our advisers, and the countless mentors and supporters with whom I “cut the rug” during this 18-month journey. Together, we danced our hearts out and we helped to create a meaningful and positive difference in the lives of law students across the country.

Thank you for an incredible and blessed year. I have been humbled to serve as our Division’s Chair and will never forget this mighty, life-forming experience. I am so proud of us and all that we accomplished together.

See you at the next dance!