Like so many other students, when I stepped onto campus the first day of law school, I was eager to learn how to think like a lawyer.  To gain insight into this structure and system that guides so many areas of American life with the goal of using this privilege to uplift communities and solve complex problems.  As in most professions, as you start your career, you begin to notice the pervasiveness of the underlying complexities that exist within your craft.  Law is no different, it is constantly evolving and being shaped by public policy, legislation and our judiciary.

As law students, we spend much of our time studying federal law and judicial opinions by federal judges, trying to piece together how each decision influences the next. Yet, ironically, many of us will never see the inside of a federal courtroom. For non-lawyers, it’s even more likely that they will not see a federal courtroom and if they do ever come before a judge, he or she will be a state court judge.

That’s because for most people, state courts are the “law” for all effective purposes. But we know surprisingly little about state court judges, despite their important role in our democracy. Unlike their counterparts on the federal courts, much of the relevant information is not available to the public, and in many states, not even collected in a systematic way.

To fill this void, the American Constitution Society commissioned the research that led to The Gavel Gap. Independent researchers working under the supervision of Professors Tracey George of Vanderbilt Law School and Albert Yoon of the University of Toronto School of Law collected data including race and gender on over 10,000 general jurisdiction state court judges in all 50 states and the District of Columbia.

What they found paints of troubling picture of courts that fail to reflect the diversity of the communities they are supposed to serve. 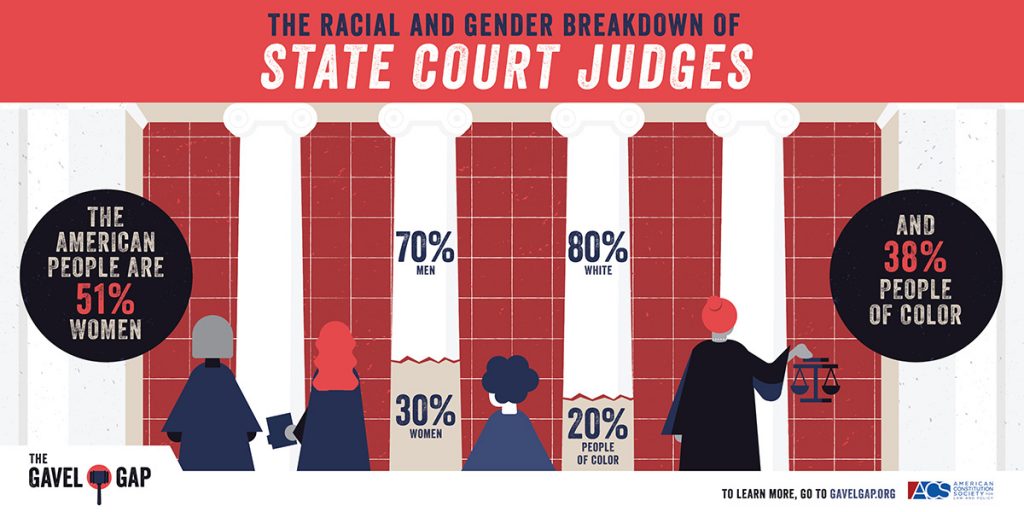 White men, currently make up only 30 percent of the population but account for an astonishing 58 percent of state court judges. 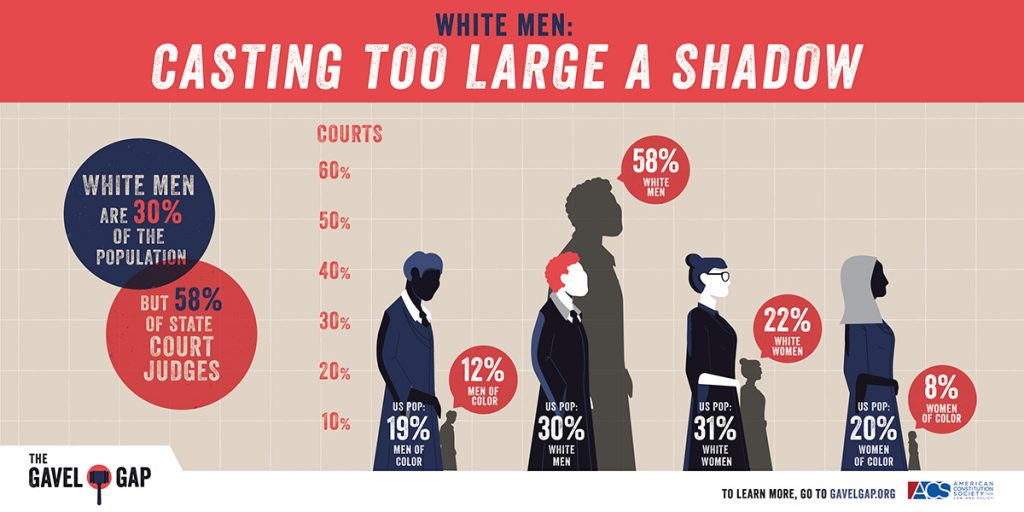 As a woman of color who is also law student, I am especially troubled by the way so many women start out exactly as am I am now – full of ambition and optimistic that we can make a difference – but somehow many of us disappear from the profession and even of those who remain very few go on to become judges.  For minority women, our trajectory is even more limited in reaching the judiciary. 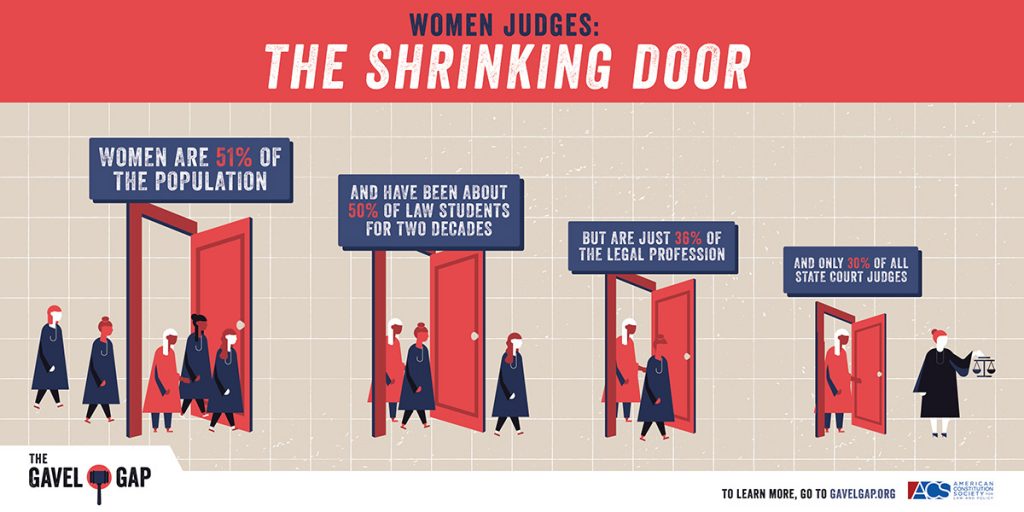 Because the large majority of cases are tried in state courts, diversity matters.  While our judiciary is founded on equal justice for all under law, the implicit biases people hold against communities of color are prevalent and impactful. Destructive gender norms and institutionalized racism underlies the trends we see across the country when looking at who accesses and exercises power which in turn directly impacts the lives of everyday people in meaningful ways.  The level of underrepresentation of women and people of color on state courts reflect the implicit biases that bar these groups from equal access to justice and that also creates invisible hurdles for law students hoping to reach positions of power that would create a more diverse perspective on criminal prosecutions and civil actions.  Whether through merit or election, citizen participation underlies the process of how judges earn their positions.  (Through the merit process, judges are appointed by the governor, with or without consent of a legislature, all of whom are elected officials.)

As such, the Gavel Gap is interconnected with other issues of disenfranchisement amongst women and communities of color, including voting rights and the importance of eligible voters participating in local elections just as much as the presidential election and where in many states minority defendants face a nearly all-white trial bench.

A truly representative judiciary would have the same ratio of women and minorities on the bench as it does in the general populations.  In almost half of the states, minority judges fall below 50% of proportional representation of the general population.  A pipeline of future judges that come from a variety of backgrounds, educations and lived experiences is essential to the way decisions are made and the meaningful impact state courts have on individual lives.

My hope is the findings of Gavel Gap will serve as a launching pad to diversifying state courts, resulting in a judiciary that reflects the communities it serves. At its recently completed Annual Meeting, The ABA’s House of Delegates called on all responsible parties to work to increase the diversity of the federal judiciary. ABA members, from law students to judges, should broaden this important message and work to increase the diversity of all our courts.