After the war ended, Smith became a pilot with Air America.  This was a dummy corporation formed by the CIA to conduct covert military operations, posing as a civilian airline.  Missions were flown in the Peoples Republic of China, Indochina (Vietnam), Burma (now Myanmar), Laos, Taiwan, and Japan.  After the end of the Vietnam War, Air America was dissolved. 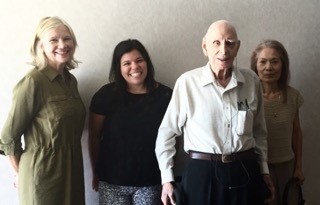 Smith (pictured at the clinic) recounts his days with Air America in China Pilot: Flying for Chennault During the Cold War. China Pilot was published by the Smithsonian Institution Scholarly Press in 2000.

While at the MVLC, Smith was matched with attorney Julie Darnieder and Marquette University Law Student Rachel Scott. After hearing the details of Smith’s case, Darnieder decided to represent Smith pro bono. By the time Darnieder became involved with the case, the contractor obtained a default judgment against Felix. Darnieder was able to get the case reopened, which vacated the previously entered judgment. The parties agreed to try mediation in an effort to resolve the matter before going to trial. After two mediation sessions, the parties reached an agreement. With Darnieder’s counsel, the Smiths were able to communicate with the contractor’s attorney and reach an agreement that settled the matter.

As a student, working with an attorney is one of the most beneficial ways to learn, says Scott. By observing Darnieder and being involved in the case, Scott was given an up-close view of the process, specific legal issues and the resolution of this case. The attorneys’ correspondence in and outside of mediation was a chance to see a legal matter from the beginning of an attorney’s involvement until the end. This opportunity gave Scott the chance, as a student, to come full circle on concepts taught in the classroom. Finally, this opportunity is a reminder of the positive effect that pro bono legal representation can have to those who need it the most.