Home » Student Lawyer Blog » Networking » Want people to talk to you? Show them your crazy.

There are many places in this world where it’s just not acceptable to talk to people. For example, the burly guy in biker gear who sidled up to the urinal beside me at the pool hall bar and asked “Do you come here often?” Very bad timing.

Everywhere else? You can make a use case for being approachable.

This is a theory I test on a yearly basis every December in Chicago, a place where many people don’t look others in the eye purely out of a sense of self-preservation. And my icebreaker is ridiculous: 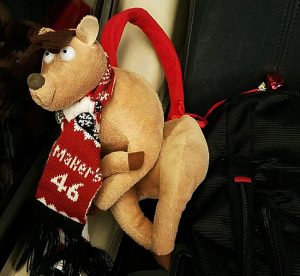 Yes, these are my reindeer earmuffs. A wide-eyed grin on one end, butt on the other, and my noggin in between a-la Steve Martin in his 1970s stand-up era arrow gag. 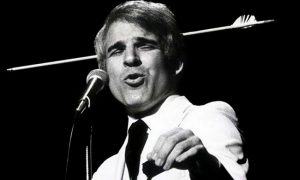 I’ve had them for five years, ever since my mother saw them at Menard’s and thought they suited my sense of humor. Over the years, I’ve made upgrades – the dollar-store bell in the back is louder than the original, and the scarf is one of Maker’s Mark’s yearly member appreciation rewards they send out at the holidays (their Christmas sweater and tossel cap did not work – their mini-earmuffs did, but this year’s mistletoe is going a bit too far, if possible).

And yes, they get a reaction that’s most commonly in this range:

But other times, something amazing happens – people will talk to me. Most commonly, the question is “Where did you get those?” A lot of people just want to say how cute they are. A child in a stroller once stared me down. For others, it’s a chuckle, a laugh, or just a polite “good morning” or holiday wishes. Twice, someone has asked to take a picture.

Why is it amazing? It’s this:

How many people do we pass daily that are preoccupied with something else? How many of them are obliviously plugged into their iPhone, listening to music, unaware of what’s around them – just a set of earbuds with a pair of legs to move them along?

There are dozens of opportunities to engage, and they’re all passing us by as we’re focused on the world between our ears.

And while you’re breaking the rules a bit, there are still rules to follow. I wrote about them three years ago in a column, and it’s time to update them a bit:

Not every time is the right time

On Monday in Chicago, the wind chill was -34°. Nobody is paying attention to a nerd in reindeer headgear Their eyes are either frozen or intent on getting indoors. And even if they wanted to say something, they’d sound like Kenny from “South Park.”

And sometimes, it’s just somebody’s busy season. Be patient. Tomorrow will be another day.

There’s such a thing as the wrong time

Wearing Christmas-themed earmuffs before Thanksgiving can be irritating to people who go into stores the day after Halloween to Christmas trees, decorations, and the first of 285 times they’ll hear “Wonderful Christmastime” by Paul McCartney. You will not be their friend.

Wearing Christmas-themed earmuffs from New Year’s through Easter might be appropriate for cold weather – if they actually kept your ears warm. These do not. Passersby will judge you as impractical, bordering on deranged.

In 2016, a mattress store in San Antonio and a Walmart in Orlando learned that the anniversary of 9/11 will never be the appropriate time for commerce. In my original column three years ago, I wrote about companies who sell “cell phones, diapers, guns and deli meat” trying to plug their brand.

When in doubt? Stay out of it. It’s not worth the hit to your personal brand.

To be seen, go where people are looking

What’s the end game to showing off your weird side? For me, it’s just a way to get people to smile during the holiday season. If they see this, maybe they’ll look around more often to see what they might be missing.

For you, the law student trying to stand out, you’re showing off individuality that might make you the Right Person For The Job ™.

That means at some point, you’ll be headed to a local legal event, an ABA practice specialty group meeting, or some other networking opportunity. Try adding something to your nametag. For me, it’s easy: I always draw a little music note (?) next to my name.

Or is there something you can put in a lanyard to make you memorable or recognizable – maybe a postage-stamp sized head shot you use on social media? Two people approached me at our annual meeting in August because they’d seen me on LinkedIn. And only one of them was actually connected to me.

What’s your niche? Is there some way to visually represent the kind of work you’re looking for? Go with that!

And the ‘that’ is ‘your’ crazy

Wearing your passion on your sleeve, if not your head, is an underrated asset in your arsenal. Remember, just because it’s not the norm does not mean that there aren’t lawyers with Star Wars action figures on the desk.

There are on mine – home office and downtown office!

I used “your crazy” in the headline for two reasons. First, your passions are your passions. But chances are, they aren’t unique. You might find a future ally in your career if you share a bit of yourself.

One attorney I videotaped in 2011 has a set of floor chairs from the Chicago Bulls championship years in his office. He very gamely (pun intended) let me videotape him walking down the hall with a basketball to “Sirius,” the Alan Parsons Project song synonymous with the Bulls introductions.

In other videos that I worked on, we featured an attorney who leads cooking classes, one who quit to make popcorn, and Apocalypto – a lawyer in his 60s who doubles as a wrestler and helped in the investigation that brought down a former governor of Illinois.

The point is this: There’s a human side to the law in addition to the responsible, serious side. Be human. Be yourself. It’s worked for your predecessors.

Have a good holiday season, BTB readers. Keep in touch with us for 2017. And good luck making those everyday connections!