Imagine getting into, paying for, and succeeding in law school—and then not being permitted to practice. That’s the risk for students who aren’t U.S. citizens. Student Lawyer‘s March April May 2017 issue starts with their stories. 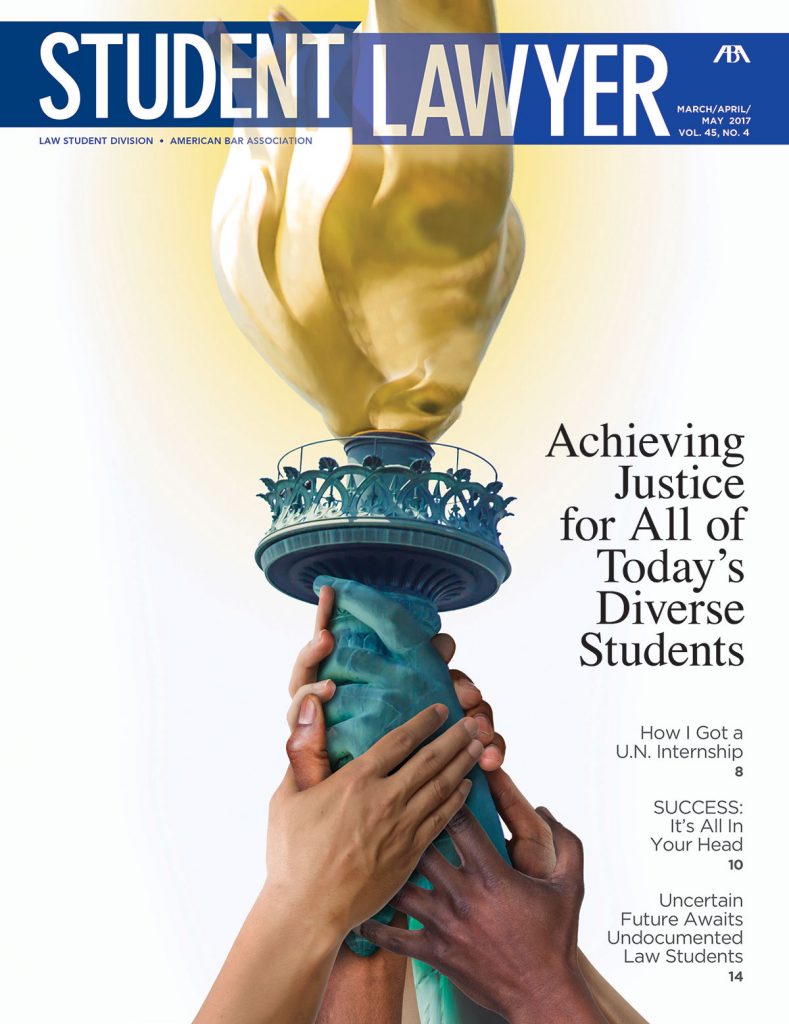 Invariably, law students work incredibly hard to get into law school and then to become attorneys. Many have faced serious hurdles along the way. Just think about your own experience—the effort, the hours, and the perseverance it has taken you to get to where you are today. Now try to imagine the obstacles you’d have to navigate if you were an undocumented immigrant.

Undocumented and unbeaten: What he’ll bring to the nation’s legal field

Until DACA, there’s been virtually no way for undocumented individuals like me to enter the profession of law. Soon, I’ll be one of this nation’s very first DACA-status licensed attorneys, with a skill to achieve something out of nothing but determination and a small opportunity.

Success: It’s all in your head

A new initiative by CWIP seeks to educate women and other underrepresented groups on how to build that successful mindset – and early indicators are that it’s gaining ground.The effort is called the Grit Project, and it was launched by CWIP to identify some of the traits successful women in the legal field have used to advance their careers and help others develop those traits.

You might think it’s your writing or speaking skills that will shape your law school career. They will. But your energy is even more important to your law school destiny.

Advice from the Inside
How I got a U.N. internship

The summer of 2016 is one I’ll never forget. As a law student, I was privileged to be afforded the opportunity to work at my dream job, while also getting to travel Europe – and I have some advice on how you can land a similar opportunity. Over the summer, I worked as a legal intern for the United Nations at the International Criminal Tribunal for the former Yugoslavia in the Netherlands.

1L Corner
No internship? What to do with your 1L summer

Getting an internship is generally the first option when it comes to how to spend the summer after you first year. But what if you haven’t been successful in securing one? Here’s a recommendation: Go abroad!

Head of the Class
An experience that haunts also motivates

Mark Grotto, a 3L at The John Marshall Law School in Chicago, grew up around the law. So it was no surprise that he’d follow in his father’s footsteps and pursue law school. What wasn’t predictable was the event that solidified Grotto’s desire to be a lawyer and his dedication to helping the homeless.

Why the ABA matters to graduating 3Ls

Stay in the ABA family. The ABA has had your back in law school; you can only imagine how valuable having an army of more than 400,000 lawyers on your “ABA team” will be when you kick off your practice.

ABA sues feds to protect loan promises
Are you worried about another difficult test even after you graduate—how you’ll handle the burden of repaying the cost of your education? You’re not alone, and the American Bar Association is working on the issue.

ABA Annual
Why I’ll be in New York in August
The ABA’s Annual Meeting — mark your calendar for Aug. 10-15, 2017 in New York City — is a must-do for students who’d like to engage in really meaningful and productive discussions that are important to every law student in the United States.

Law School Nation
News from law schools across the country, including an opportunity to study and work for a semester in Olympia, Wash., represent underrepresented individuals, help homeowners recover from floods in Louisiana, participate in a New York diversity and inclusion program, take a new course in the Coastal Law Field Lab and research in the new Center for Access to Justice.