We knew something was in the water as we noted Maine’s entry into the ranks of states accepting a score from the Uniform Bar Exam. We just didn’t know how far south that something was.

Enter the U.S. Virgin Islands – the exquisite trio of St. Thomas, St. John, and St. Croix and their surrounding satellites in the Leeward Islands of the Caribbean. On Friday, the Supreme Court of the Virgin Islands also officially started accepting a UBE score, starting with the July 2017 exam sitting.

And how did we learn it? When we posted our recent addition of Maine, we got this response on our Facebook page: 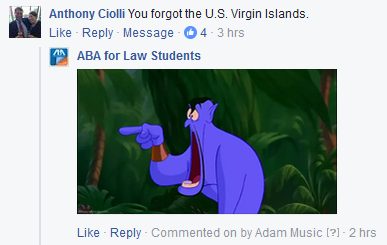 That’s us dropping our jaw in both shame … and celebration.

We’re still missing Puerto Rico, and we’re still 0-for-the-Pacific. But we’re still rooting for Guam, Palau, or the Northern Marianas to hop on the UBE train. Or boat, as it were.

Somewhere in Charlotte Amalie, we hope friend-of-the-division Tom Bolt, who has been practicing on St. Thomas since the early 1980s, is smiling at this news.