Editor’s Note: This post first appeared on the RIPS Law Librarian Blog with the title, “If You Come at the Justice, You Best Have Sources”. And trust us, Christine has ’em.

It started out, as most catastrophic events do, with a simple tweet.

Should be easy enough, right? Did esteemed future jurist and Supreme Court Justice Benjamin Nathan Cardozo sit for the New York Bar Exam five agonizing times before passing on his sixth try? Not knowing anything about this allegation, I went looking for the source. The post on Student Lawyer, which was included in the tweet, linked out to another post from Bar Exam Hell. Here’s where we run into a slight issue. Bar Exam Hell did not list or link out to any sources for its entry on Cardozo. Student Lawyer also includes links to a few other stories. Tipping the Scale has no source listed. Buzzfeed links out to the Wall Street Journal which cites a post on the Brennan Center’s blog by Elizabeth Wurtzel. (Sidebar: Love the Wayback Machine. Love. It.) The post on The Volokh Conspiracy also goes back to the Wurtzel post, which is beginning to seem like Patient Zero for this rumor. Yes I do say rumor. Spoiler alert: it’s not true.

Here’s the thing: I love footnotes. As a writer, nothing brings me more joy than writing an article whose footnotes are so crammed with additional tangential information that they could comprise a second article. As a reader, I’m downright giddy when I see a number in superscript following an interesting sentence that will lead me to even more sources. Yes, I am that person. Even while blogging, I can go a bit hyperlink-happy. So you can imagine me working through the various stages of grief upon realizing that the “sources” for this allegation were nothing more than an echo chamber. Once I finished breathing into my paper bag and accepted that sheer force of will would not make any proper sources magically appear, I got ready to go full on librarian on this question. Now’s probably a good time to throw in that I don’t particularly care whether or not Cardozo passed the bar on the first go. There’s nothing wrong with having failed the bar, but not properly sourcing … that’s unforgivable.

We're hitting the books and will get back to you! pic.twitter.com/i4e76kcJ…

With all the confidence of a reference librarian on a mission, I marched off to our shelf of Cardozo biographies. That’s right. I hit the books. Actual, physical books. Only there was a bit of a problem. I couldn’t locate any footnotes, citations, or, in some instances, even mentions, of Cardozo’s bar exam experience. As it would turn out, there was one biography that had just the footnote I needed, but at the time of the search frenzy, both of our copies were checked out.

The following is accepted (and verified) fact:

Cardozo graduated from Columbia College in 1889.[1] He continued on at Columbia’s law school.[2] Right around the end of his second year, there was a bit of a kerfuffle—the two year LLB program was being expanded into three years.[3] Cardozo, along with a few faculty and many students, did not return.[4] Cardozo has acknowledged the fact that he did not graduate from law school.[5]

At my whit’s end, I decided to phone a friend. And by a friend, I mean many wonderful librarians and archivists at a variety of institutions, which are listed at the end of this post. There was quite a bit of research drama as I found out that the NY State Bar Exam was not standardized until 1894[6] (which meant that the official record began in 1895[7]), but there was an 1871 law[8] that somewhat regulated what the bar exam should be and when it should be administered in New York. (I have to give a special shoutout to the awesome people I spoke to at the NY Board of Law Examiners who, given the time of year, would have been perfectly within their rights to hang up on the random law librarian asking about the bar exam from 1891.) However, it all ultimately came down to a footnote in Andrew L. Kaufman’s biography, Cardozo, which pointed to Box 10 of the Benjamin N. Cardozo Papers at Columbia University’s Rare Book & Manuscript Library.

If you stop by the Butler Library and request Box 10, you’ll find a folder of diplomas and awards. Within that folder is a photstat of Cardozo’s certificate of admission. It states that he took the bar on June 26, 1891 and was admitted on October 7, 1891. 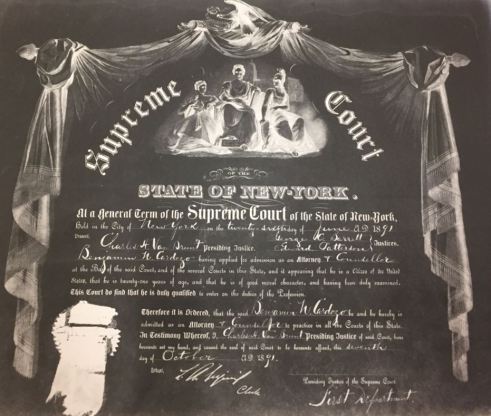 So let’s lay this rumor to rest and remember to always, always, always cite sources, no matter what the medium. I also have some thoughts on how those sources should be formatted, but, given the fact WordPress removed all my small caps, we’ll save that for another time.

[4] Polenberg, The World of Benjamin Cardozo 39.

[6] Alfred Zantzinger Reed, Training for the Public Profession of the Law: Historical Development and Principal Contemporary Problems of Legal Education in the United States with Some Account of the Conditions in England and Canada 103 (1921), available at ia802701.us.archive.org/….