Pizza came from Italy to the United States. And then, according to the Italians, pizza went to hell.

The evolution of pizza has brought it far from its Neapolitan roots. And yet, it has the New World to thank for its creation. The tomato, native to the Americas, first came to Europe in the 1500s – where it immediately started killing rich people through lead poisoning and got lumped into a botanical classification with nightshade, earning the nickname “the poison apple.”

Which totally doesn’t help the “is a tomato a fruit or a vegetable” debate.

But eventually, the “edible wolf peach” (not making that up) rehabbed its reputation across the Atlantic in the United States, sailing back into the Mediterranean with the invention of Pizza Margherita in the 1880s.

The Neapolitan is the template for the modern pizza. And you had better not call your sorry American excuse for a pizza “Neapolitan” unless you clear it with Verace Pizza Napoletana, the Italian pizza police. They have a 3,500-word set of rules and regulations with actual “Articles” as if it were the Constitution. Article 3.2.2 covers the minutiae of what goes into an authentic Neapolitan spatula.

And if you thought the bar was hard to pass, realize there are only 96 pizza joints in our fair country that meet the high standards and bear the VPN seal of approval.

But Naples’ micromanaging of the good name of “pizza” isn’t unique to The Old World.

Because folks, we are a nation divided by pizzas.

In late 2013, the Pizza Civil War took to the media as Daily Show host Jon Stewart and Chicago Mayor Rahm Emanuel dueled over who does it best. Stewart neither minced onions or words with his opinion:

Back in The Windy City last month for The Warrior Games, Stewart has tempered his view, slightly: “I had to concede on taste. It’s very tasty,” he said. “But the pizza, I don’t know if I would call it that. It’s a delicious bowl of everything that’s good in pizza.”

Whether or not it had to do with Emanuel’s retort – the gift of deep dish with anchovies – is unclear. It could also have been a visit from Marc Malnati, owner of Lou Malnati’s pizza, that caused his change of heart.

Eventually, even the late Supreme Court Justice Antonin Scalia jumped into the fight, “It’s very tasty, but it’s not pizza,” said the Queens-born Scalia. “It should be called ‘a tomato pie.’ Real pizza is Neapolitan. It is thin. It is chewy and crispy, OK?”

Three years earlier, in 2011, Scalia had this to say to California Lawyer about New York pizza and how it rates next to Chicago’s signature style: “I think it is infinitely better than Washington pizza, and infinitely better than Chicago pizza. You know these deep-dish pizzas-it’s not pizza. It’s very good, but … call it tomato pie or something. … I’m a traditionalist, what can I tell you?”

It’s an opinion (never published) that is totally in keeping with Scalia’s originalist roots.

Despite it never being entered into the appellate record, the legal profession takes judicial notice of Scalia’s entry into the fray and will take jurisdiction over the great Big Apple vs. Second City pizza war as the American Bar Association hosts A Trial of Two Pizzas at ABA Annual Meeting on Aug. 10 in New York City itself.

Marc Malnati is back to defend Chicago’s honor:

And the deep dish is up against the slice from Brooklyn’s legendary Table 87:

Now some of you may be thinking, “Adam, you’re an ABA member from Chicago. You’re obviously biased in favor of deep dish.” It is true that I had my wedding rehearsal dinner at a Lou Malnati’s – and their pies are fantastic. But I’m not from here, I’m from western Pennsylvania. And My Cousin Vinny (yes, not making that up to just get a legal movie joke in, even if it’s via marriage) has his own namesake pizzeria. It’s closer to a New York style slice.

Others may be saying, “But what about my city’s style of pizza?” The answer is – it doesn’t matter what your style of pizza is. Let’s look at some styles:

The Sicilian: The Grandma of Pizzas, it’s usually square and is too ubiquitous to really come from anywhere but Sicily. Is it good? Is there such a thing as a bad pizza? But it also is awfully reminiscent of school lunch pizza.

Detroit Style: So, your selling point is “we have thicker crust and we bake it in trays that came from auto factories”? Kinda fits with the hipster aesthetic. But it’s still a Sicilian, except it’s driving a Fiat.

St. Louis Style: The Taxonomy of Pizza Styles in America describes it as “a big plate of cheese and crackers” as if this is a feature, not a defect. The cheese includes both Swiss and Liquid Smoke. This is not pizza, it’s an abomination.

California Style: OK, we get it L.A. You like looking like you’re healthy. Barbecue chicken pizza is wonderful, but there’s such a thing as trying too hard to look gourmet. Even Stewart allied himself with Malnati when burying the pizza slicer, declaring: “At least, let’s face facts, we’re not California.”

Pizza Hut: It was never great pizza, but once it did this, it eliminated itself from any serious pizza discussion for eternity. Go sit in the corner and think about what you did. 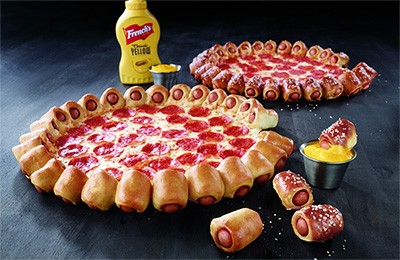 Hawaiian Pizza: Let’s start this discussion with the scientific fact that pineapple does not belong on pizza. And it takes more than tossing Canadian bacon (not bacon or Spam) and a few pineapple chunks on pizza to make something Hawaiian. The inventor of “Hawaiian Pizza” died recently. He was Greek. He created “Hawaiian Pizza” in Canada. It’s the most popular type of pizza in Australia, the land of Vegemite. The president of Iceland – the most peaceful country on the planet – would ban it if it weren’t for established principles of Democracy. When Iceland hates you, it’s time to pack it in.

Taco Pizza: And while we’re at it, this culinary cultural appropriation is a tostada.

We’re not saying you can’t enjoy them. Weird pizza is still pizza, which is better than most things. It just has no place in a serious discussion of pizza.

So we’re left with two contenders: Chicago and New York. If it were basketball we were talking about, the conversation would be over.

Granted, when it comes to baseball, the Yankees would push New York to the lead with 53 overall championships to Chicago’s 30. That advantage comes primarily from the 35 to 6 World Series titles margin and a few championships won in New Jersey and Long Island. Do we mention that New York has never won either an MLS title or the Arena Football League?

So it’s up to the legal profession to settle this argument. Come hungry, because Our Supreme Pizza Court is you, the Annual Meeting attendee. And your opinion will decide the fate of the pizza galaxy.

See you in New York!