When was the last time you watched a movie that was both entertaining and edifying to your legal education experience? If your answer is never, have no fear.

The movie “Marshall,” released in October 2017, is a biographical film based on the life of U.S. Supreme Court Justice Thurgood Marshall. Written by a practicing trial attorney, Michael Koskoff, a partner at Koskoff Koskoff & Bieder PC in Bridgeport, Conn., and his son Jacob, it’s part thriller but also part history lesson. (Check out Koskoff’s advice for loving both the law and your work outside of the law in our Advice from the Inside column.)

Here’s a film that won’t make you feel guilty for taking a break from your studies because you’ll leave with more insight into the law. It tells the story of a trial held in 1941 involving an attractive and wealthy Greenwich socialite who accused her African-American servant, Joseph Spell, of multiple rapes and attempted murder in what newspapers called a “night of horror.”

With the war in Europe as a backdrop, a racially charged media frenzy surrounded the trial. A 32-year-old NAACP lawyer at the time, Marshall came to Bridgeport to defend Spell, working alongside Sam Friedman, a young, Jewish insurance-defense lawyer.

Chadwick Boseman stars as the first African-American U.S. Supreme Court justice handling one of the first cases of his legal career. Alongside Boseman are heavyweights in the movie industry you may recognize, including Josh Gad from “Frozen,” Sterling K. Brown of “This is Us,” Kate Hudson of “Almost Famous,” Jussie Smollet from “Empire,” and Rozonda “Chilli” Thomas from the band TLC.

“Marshall” was screened at the 2017 ABA Annual Meeting in New York, and Koskoff answered questions following the movie. Also in attendance was Lauren Friedman, daughter of Sam Friedman.

Student Lawyer caught up with Boseman recently to get his take on the film, along with his personal account of his experience playing the role of a legal legend. 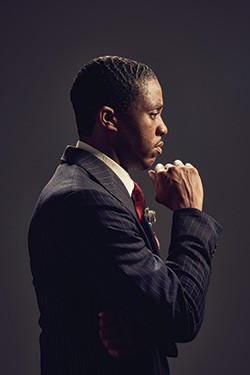 SL: How did you prepare to play the role of such a legal icon?

BOSEMAN: The script definitely influenced me to read up on Marshall. There were two books that I looked at primarily: Thurgood Marshall: American Revolutionary and Young Thurgood: The Making of a Supreme Court Justice. In conjunction with those two books, I was able to watch a few clips from writers who knew his family.

SL: Was there anything especially difficult about preparing for this role?

BOSEMAN: Yeah, courtroom drama tends to be less interesting than other films. So we had to find what’s driving the film to make sure we got everything out of the script, and we tried to find all the aspects of it.

SL: How does this role compare to movies you’ve done in the past?

BOSEMAN: Marshall is known for what he sounds like, how he walks, and how he talks. What you may not know about him is that he had a certain swagger and a certain love of life despite his circumstances. For me, it was more about finding Thurgood Marshall instead of imitating him because we don’t know him to imitate him—he was a maverick of sorts.

SL: How do you describe the plot of the film, meaning, is it Marshall’s life story? Is it his legal story?

BOSEMAN: It’s more about the legal story because his life was put on the back burner many times. His own personal story burns underneath the story.

SL: How much did you know about Thurgood Marshall before this role?

BOSEMAN: Before this movie role, I was aware of the tactics he used. These tactics were seen in cases like Brown v. Board of Education. Back then, restrictive covenants were used in real estate transactions. They functioned as aspects of Jim Crow laws that enforced racial segregation.These were clauses within housing contracts that didn’t allow property to be sold to minorities, including African-Americans.

There were some things I already knew, but acting is all about intention. For instance, is this person always serious? As an actor, it’s about pulling the personality out more than the facts surrounding them. 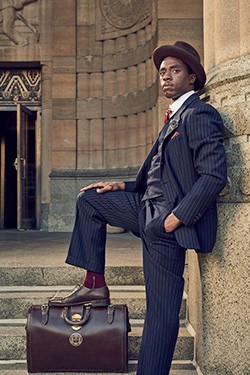 BOSEMAN: The script! It wasn’t just the role. They both coincided. The writing was really good, especially in the dialogue scenes. The interplay between Marshall and Friedman was such good entertainment. The fact that this film was about a trial of a black man who allegedly raped a white woman is also very topical to today’s issues regarding police brutality and the ways black men are treated by the cops. I also knew it would get a great cast.

For those reasons, I wanted to take this role.

SL: Based on the film’s use of legal vocabulary and the legal techniques within the trial scenes, would you say you have a better understanding of how the legal system works, at least during that time period?

BOSEMAN: Sure! Based on the things I was able to read and playing the role, I do have more of a sense of the process. I’ve been able to witness the process. Playing this role made me go through it in a different way.

SL: Was there anything that surprised you about the legal system after playing this role? If so, how did your perceptions of Marshall and the civil rights movement change?

BOSEMAN: I wouldn’t say it surprised me. Marshall is gagged by the court after the judge prohibited him from actually speaking about the case. There’s a great irony that he’s gagged and was forced to quarterback this case without talking. This was an interesting challenge.

Taking his tongue away from him makes it more than just a courtroom drama. It added like a classical feel to it. The way that politics and the media come into play inside the courtroom is also interesting. If it weren’t for the way that the city of Bridgeport was afraid of being perceived in the media, it probably wouldn’t have allowed Marshall in the courtroom. Because the NAACP had a certain amount of clout and Northern states didn’t want to look like southern racist states, they allowed him in the courtroom. They wanted to keep up appearances.

Another thing that surprised me was how attorneys have to play things in and out of the courtroom. The speech Marshall gives outside on the steps of the courthouse was significant. This affected the case. The judge hears the case for its truth later on because he’s forced to. The weight of the world is on the judge’s shoulders, and he’s put in a place where he has to think of his morals instead of this good ol’ boy story that protects him on the inside.

SL: What was the most challenging part of playing Marshall?

BOSEMAN: The fact that he couldn’t talk in the courtroom cases. Marshall has a certain amount of confidence, but you have to make sure people still like him. There’s a balance there that you have to strike. The director would at times have to do other takes where I’d play Marshall in a way where people would still like him afterwards.

Marshall had an ego that allowed him to deal with other people’s egos and not be afraid. He used different techniques to deal with power throughout his life, and he also had a great deal of sarcasm. It was challenging finding all those different tricks that he might use based upon whom he’s dealing with and using them throughout the movie.

SL: What do you think law students today can learn from this movie, outside of the holding of the case?

BOSEMAN: You can’t be afraid to lose. Marshall lost a lot of cases. He failed a lot before he succeeded. And he failed even after he succeeded. You’re going to lose sometimes, especially during those times when you’re trying to move things along while dealing with the status quo. Marshall was losing a lot on the low level but winning on the high level.

That process is something you could learn from Marshall. That’s how he made his career. It actually got him a seat on the U.S. Supreme Court. I think that’s definitely a valuable lesson.

It’s also important for balance in doing things you believe in and having a healthy amount of ego because you need both to be successful. Marshall had a healthy amount of ego and believed in what he was doing. Law students can also learn that if you’re doing things just for the money, you’re not going to make the kind of impact Marshall made. Being gagged in the courtroom was like him having one hand tied behind his back. Each student has to earn respect. You can’t think that what you’re doing is more difficult than what others are doing. So there are things that give you perspective on what your purpose is.

SL: How do you think this movie will impact the practice of law?

BOSEMAN: I’m not sure. But what could happen is more African-Americans decide to pursue law. Maybe an influx or increase in enrollment could ensue. We’ll see in a couple of years. I don’t know if it will, but I hope so.

SL: What do you think the average nonlawyer will take away from this film?

BOSEMAN: I think there’s a hopeful feeling coming out of this film, despite the fact that you know that the justice system can be unfair toward African-Americans. When you see someone like Marshall, who has the wit and the intellect to beat the system, you hope it gives us sort of a key to breaking barriers that are still present within. Marshall clearly believed in the system. He believed in the ideal core of the system. He believed it could work and that it should work. If you make people adhere to it, then it’ll work for us. Marshall felt that there’s no need in being pessimistic even though things haven’t always worked in favor of African-Americans.

You hope that a generation will rise up and have the courage and spirit to push the envelope further. All you can do ultimately is try to make people better people. I hope that when you walk away from this movie, you’ll leave feeling like we’ve already come a long way and that we can and will go further. I got a sense of that myself when I left the movie.

RACQUEL RICHARDS is the student editor of Student Lawyer and a third-year student at Elon University School of Law in Greensboro, N.C.