Written by a practicing lawyer, a film analyzes the start of Thurgood Marshall’s career. Here, the movie’s star, Chadwick Boseman, talks about his experience playing the larger-than-life character. Student Lawyer‘s September October 2017 also visits with Michael Koskoff, the writer of the movie. 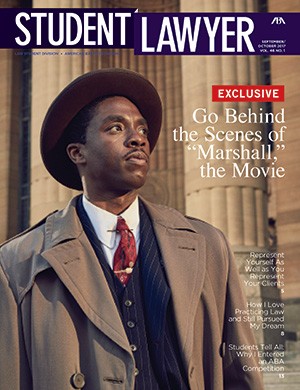 The early career of a legal icon comes to life

The movie “Marshall,” set to be released in October, is a biographical film based on the life of U.S. Supreme Court Justice Thurgood Marshall. Chadwick Boseman stars as the first African-American U.S. Supreme Court justice handling one of the first cases of his legal career. He talks with Student Lawyer about his performance.

Michael Koskoff: I was admitted to the bar in 1966. Since then, I’ve been a trial lawyer—at first criminal defense and later plaintiffs’ malpractice, product liability, and civil rights. Yet, unlikely as it may seem, after 51 years of practice, a movie is about to be released that I co-wrote with my son.

Why I entered an ABA Law Student Division competition

Did you know that the American Bar Association sponsors four skills competitions for students nationwide? Here, six students explain why they threw caution to the wind and entered. They also reveal the work involved and the rewards they earned from the experience. Finally, they offer tips to students like you who’ve been mulling the idea of entering but haven’t yet made the commitment.

In today’s modern world, you may be among the law students who believe the law library is a relic of the past, a giant space filled with books you’ll never use. And honestly, that last bit about never using the books may well be true for some of you. But a library is more than merely a warehouse of books.

Head of the Class
Beating poverty in Africa, one child at a time

Imagine that, in addition to the challenges you face in juggling all your law school activities, you find yourself making calls to Kenya at 3 a.m. or having a Skype meeting with Kenyan lawyers between classes. To Stephen Fleischer, a third-year student at Loyola University Chicago School of Law, this is far from overwhelming. It’s business as usual since 2016.

Leah Ward Sears: I used to believe that holding on and hanging in relationships that no longer bring any value to my life (or that are even detrimental to it) was a sign of great strength. I don’t believe that anymore.

High cut scores: A bar to the bar?

Are the cutoffs for passing the bar too high in some states? The California Supreme Court will soon answer that question. It’s expecting a report this fall on the validity of the California bar as well as deliberating whether to lower the California cut score, which is the second-highest in the country.