Here’s a solution to a legal citation problem that comes up all the time. Please bear with me for the intro. It will be worth it.

While reading a court decision earlier this year, I came across a passage in which the court quoted authority from an earlier decision which, in turn, had quoted an even earlier decision. As often happens in that situation, the quotation had some brackets indicating that the judge had changed something from the earlier opinion and some single quotation marks to distinguish the part of the quotation that came from the immediate source from the part that came from the earlier source. The citation that followed the quote included a parenthetical citation to the decision that was quoted within the quotation, and there was also a parenthetical indicating that citations or maybe an ellipsis had been omitted from the quotation, or maybe that the alterations were in the original.

I started to get annoyed, as a reader, because all the clutter made the opinion harder to read. But then I recalled all the times when, as a writer, I had been faced with similar problems.

Lawyers like to quote authorities so courts don’t have to take our word for what the authority says. Judges like to quote too, so the decision you want to quote often quotes an earlier decision. And there’s a good chance that decision quotes something even earlier.

Courts don’t usually quote full passages from earlier decisions without any changes. They alter them here and there to fit into the new decision. This is perfectly understandable and there’s a way (The Bluebook rules) to tell the reader about those minor changes. But as propositions are quoted and requoted from decision to decision, those minor changes add up. So it often turns out that when you want to quote a nice passage from an authoritative source, you have to deal with a bunch of brackets, ellipses, internal quotation marks, and emphasis that the passage has picked up along the way. You’ll also need to cite the source your source cited and maybe add other parenthetical information. And you probably want to make your own minor changes, so you’ll have to indicate them too.

So I sympathized with the opinion author. Quoting decisions that quote other decisions often means spending time figuring out how to minimize the visual and citation clutter while retaining the point of the passage. And usually the clutter isn’t adding any useful information for the reader. Wouldn’t it be great, I thought, if we could get rid of all that clutter with a promise that none of it was important? Here’s what I tweeted:

I propose a new parenthetical for quotes that delete all messy quotation marks, brackets, ellipses, etc.:
(cleaned up).

Twitter (or at least the lawyers who follow #AppellateTwitter) loved the (cleaned up) idea, so I wrote a quick proposal for it, which I later made into a longer article:

The idea is simple. When you use a quote to draw on the authority of the court you’re quoting, the reader doesn’t need to know that the court was itself quoting an earlier authority because the words of the quotation have become part of the new opinion. The reader has even less need to know what brackets or ellipses or internal quotation marks were part of the original quote. So why not let authors take them all out (and change capitalization without brackets too), and use one signal to indicate that to the reader? If the author makes new alterations, they can be indicated according to the normal rules.

Using (cleaned up), the passage can be quoted as follows:

This Court has “clarified that while a PSR generally bears sufficient indicia of reliability,” that does not mean that “bald, conclusionary statements . . . acquire the patina of reliability by mere inclusion in the PSR.” United States v. Rico, 864 F.3d 381 (5th Cir. 2017) (cleaned up).

Brackets, parentheticals, internal quotations marks, and “quoting” citations are all omitted. The ellipsis in the quoted version indicates (according to the ordinary rules) that the omission was the author’s. With (cleaned up), the quoted passage is easier to read than the original. And it’s fewer words too!

Cleaning up is easy. To quote language from a decision that includes a quotation from another decision, simply enclose the words of the quotation itself within a single set of double quotation marks, leaving out brackets, ellipses, internal quotation marks and citations, and footnote call numbers. Capitalize the first letter of the quotation if it begins your sentence; make it lower case if it does not. Cite the source of the quotation as if the words were original to the court you’re citing, and add (cleaned up) to the citation. If you alter the quote yourself, use brackets or an ellipsis.

“But wait,” you might be saying, “that sounds great but I’m not going to be the first one to use it.” If so, I have good news for you. People are already using it.

Since March, a growing band of legal-writing heroes have been spreading the (cleaned up) innovation across the country. It has appeared in more than 100 court filings, including in the U.S. Supreme Court, 9 federal courts of appeals, 14 federal district courts, 8 state supreme courts, 14 state appellate courts, and one state trial court. A dozen judges (nine federal judges) have used it, including in opinions for the Fifth Circuit, the Supreme Court of Kentucky, several federal district courts and state appellate courts. It has even been endorsed by Bryan Garner, universally recognized legal writing expert and author of Black’s Law Dictionary.

I like "cleaned up" as a signal in legal cites. Reavley J. may have been the first circuit judge to use it. t.co/YIqpl641Ss

And NYU’s Annual Survey of American Law has resolved to use it in their forthcoming issue.

If you’re worried that the court won’t understand what it means, you might consider dropping this reassuring footnote:

So join the revolution. Make your writing easier to read. Start cleaning up! 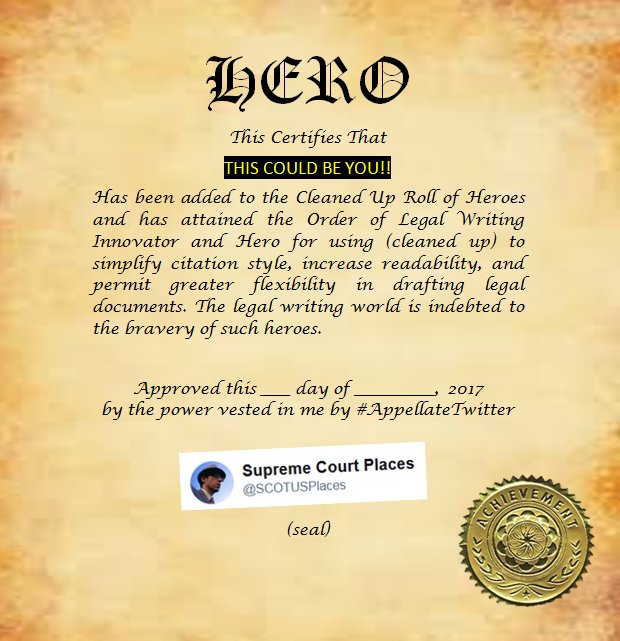