The origins of the title to this article derives from World War II at a time when ship convoys from the United States were making their way across the Atlantic to the United Kingdom.  Anyone in the know about ship movements was warned not to talk about it publicly for fear that the information would fall into the wrong hands, thereby endangering the ships and crew.

My father, who served on Admiral Nimitz’ staff stationed in Pearl Harbor, understood very well the need for discretion when discussing ship movements in the Pacific. 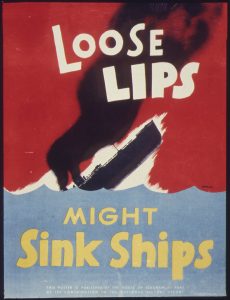 This phrase has survived the war and lives on in our current vocabulary as a compelling metaphor for using discretion when talking about sensitive matters in public.

The phrase is also well suited to describe the potential metaphorical consequences when lawyers discuss client matters in public that can result in the disclosure of client confidential information and the loss of the attorney-client privilege.

The latest example of this is the conversation between White House counsel in a restaurant that was overheard by a New York Times reporter in which the lawyers openly discussed litigation tactics they intended to use in response to the special prosecutor’s ongoing investigation of possible Russian influence on the 2016 election and tensions between members of the legal team.

Here's a photo of Ty Cobb & John Dowd casually & loudly discussing details of Russia investigation at @BLTSteakDC while I sat at next table. pic.twitter.com/RfX9JLJ0…

Details of their conversations appeared in articles in the Times on Sept. 19 (‘Isn’t That the Trump Lawyer?’: A Reporter’s Accidental Scoop) and Sept. 17 (Trump Lawyers Clash Over How Much to Cooperate With Russia Inquiry).

Clearly, this event vividly brings to life and adds a new dimension to the old maxim that advises against sending an e-mail written in anger or haste (or in this case talking about a client matter in public) unless you wouldn’t mind seeing it on the front page of the New York Times!

Surprisingly, in my experience, such indiscretions are not entirely unusual.  During my daily commute to and from the office, it is not uncommon to hear fellow commuters who I assume to be lawyers conversing on their cell phones or talking to companion travelers about their client matters and I often wonder, what if there is someone within earshot who is not a friend of your client and is listening in?

One of the sacrosanct duties of a lawyer is to protect the confidences of his clients.  Model Rule 1.6, Confidentiality of Information of the ABA Model Rules of Professional Conduct states that:

“A lawyer shall not reveal information relating to the representation of a client unless the client gives his informed consent”.  There are a number of exceptions to this Rule, but none of them would be applicable to a lawyer discussing confidential client matters in public.

Subpart (c) of the Rule states:

A lawyer shall make reasonable efforts to prevent the inadvertent or unauthorized disclosure of, or unauthorized access to, information relating to the representation of a client.

Paragraph (c) requires a lawyer to act competently to safeguard information relating to the representation of a client against unauthorized access by third parties and against inadvertent or unauthorized disclosure by the lawyer or other persons who are participating in the representation of the client or who are subject to the lawyer’s supervision.

Clearly, when out in the public lawyers should be careful to avoid discussing confidential client information.  Some state bar association ethics opinions have cautioned lawyers to be mindful of their duties to protect client confidences in various related contexts.  See, e.g. New York State Bar Opinion 1102 (2016) (in-house lawyers who share office space with nonlegal staff must take steps to ensure that their conversations about clients are not overheard).

Delaware State Bar Opinion 2001-2 discussing confidentiality concerns when lawyers’ use e-mail and cell phones to discuss client matters made this observation, cautioning lawyers about carrying on conversations in public over a cell phone:

…The extraordinary instances in which mobile phone communications might be electronically intercepted are far less likely than the problem presented when lawyers and clients share confidential communications on mobile phones while in public places within earshot of others. Lawyers therefore should take precautions not to discuss confidential matters with clients while in a public place, such as on a train or in an airport, if others may overhear the conversation. Likewise, lawyers should advise their clients to take similar precautions when speaking to counsel on mobile phones.

Depending on the circumstances, there is authority to suggest that the attorney client privilege may be lost when lawyers have conversations with their clients that are not held in a confidential setting.  See, Presnell on Privileges, Meeting Client in a Coffee Shop? Be Wary of Privilege Waiver that discusses MacFarlane v. Fivespice, LLC, 2017 WL 1758052 (D. Ore. May 4, 2017) in which the plaintiff argued that a conversation between a lawyer and an agent of the defendant in a coffee shop lost the privilege because it took place in public.  The defendant prevailed and retained the privilege but only after convincing the court that there was no one within earshot at the time the conversation took place.

So, the next time you are in a public space whether it be at a restaurant, a sporting event or on your daily commute, think twice before talking about confidential client matters in a location that does not provide the level of privacy and security that your client deserves.  You never know who might be listening in.