Home » Student Lawyer Blog » Networking » A Jar of Post-Its: How gratitude got me through law school

Confession: I didn’t love the first semester of law school.

As a 3L, I find this statement is met with more skepticism than it was even just a year ago—rolling eyes and lighthearted scoffs from first-years who are hard-pressed to believe that I ever felt out of place. I, of course, know better.

Today marks Day 2 of being in Ann Arbor, and if I’m being honest, I’m feeling kind of inadequate. Yesterday and today both had their enjoyable moments . . . but as a whole, I just feel so uncomfortable in my own skin. Uncomfortable and insufficient.

I know it’s my insecurities talking, but when people say, “Hey! Yeah, I went to Yale,” or “Hey! Yeah, I have a Masters and lived in India for a year learning Sanskrit.” or “Hey! Yeah, I spent the last 2 years in NY, working for an advocacy group dealing with the Israel-Palestine conflict,” all I hear is “Hey! Yeah, I’m not sure you realize this yet, but you’re way out of your league.”

And, man, did I feel out of my league.

I was born in raised in Arkansas—a state frequently associated with Walmart, bare feet, and “kissin’ cousins.” I’d only ever attended public schools, and I didn’t take time off to gain “work experience” after graduating college. I was certain my classmates knew I didn’t belong. And that if, by some miracle, they didn’t, it would not be long before they figured it out. 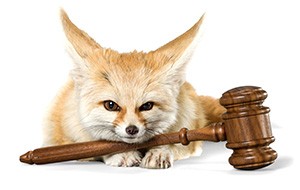 The moment of truth came with my first cold call. I was in Property, and after three weeks of talking about 19th-century fox hunting conventions, we were on to bigger and better things. The day’s readings included two cases about catching fish and a few pages from a piece of fiction. The professor asked me to state the facts of the second case. I was feeling confident. “No need to look down at my notes,” I thought. “I’ve got this.”

As I began to explain the case, the professor pressed me with questions. The Socratic method—classic. I pressed back, ignoring his increasingly dubious expression. “He must not be used to students being this prepared,” I reasoned. As his look of confusion became one of concern, the student sitting in front of me turned around. He leaned toward me and spoke in a whisper that seemed to swallow the room: “I think you’re talking about the Moby Dick excerpt…” 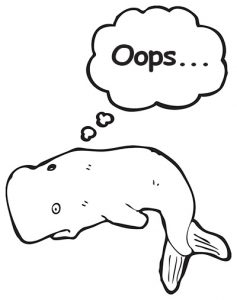 Never before had I felt destined to fail. It was stifling. But it reminded of a speech given by one of my mentors in college. She spoke about being the Director of Student Life, and how she often found herself meeting with freshmen struggling to acclimate. At the end of these meetings she challenged them to spend part of each day writing out five things they were grateful for. She believed it was impossible to, at one time, feel both gratitude and hopelessness.

I gave it a try. I placed an empty jar next to a pen and a pad of post-its that never left my desk. I wrote my “five things” on a sticky note, folded it up, and dropped it in the jar. In a way, it felt like entering a raffle. And I’d never won a raffle.

But I kept making lists.

One day, my list changed. Instead of jotting down things I was grateful for, I wrote five names. And rather than putting the post-it in my jar, I stuck it, unfolded, against the backboard of my desk. I bought a book of stamps and placed it next to my pen and my sticky notes.   For the next five days, I stopped making lists and started writing thank you notes. 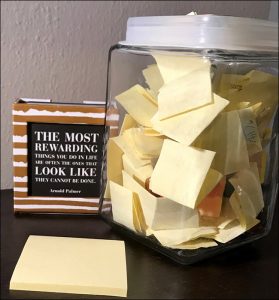 These impromptu “thank you’s” led to kind words from old friends through emails, letters, and phone calls. I strategically placed the pieces of snail mail around my room—beside the bed lamp, on the mirror, next to the coffee maker. I created a folder for the emails and labeled it: “Ya Done Good, Kid.” Over the past two years, its contents have grown to include job offers, moot court advancement notifications, and encouragement from people I deeply admire.

I admit I was initially skeptical of this idea that gratitude and hopelessness could not be felt simultaneously. But there is something to the adage, “perception is reality.” And taking time each day to reorient myself into a posture of gratitude dramatically changed my perspective.

We fall into “slumps” for a variety of reasons. Not least among these is the fact that law school is just hard. And we’re tired. To be honest, I don’t know that a box of thank you notes can change that. But sometimes we fall into slumps because law school—or our conception of it—has convinced us that we don’t deserve to be there. In those instances, a group of people and a jar full of post-its reminding you otherwise can really come in handy.

This blog post was inspired by #PracticeTuesday’s discussion on the “October Slump.” Many thanks to Rachel Gurvich and Sean Marotta for facilitating the conversation and to Adam Music for encouraging me to build out my thoughts on the importance of “warm fuzzies” in law school.