How do you create career opportunities for yourself? One way is to develop leadership skills—and it’s never too early to do that. The January/February 2018 issue of Student Lawyer gets you off the starting square and on your way. 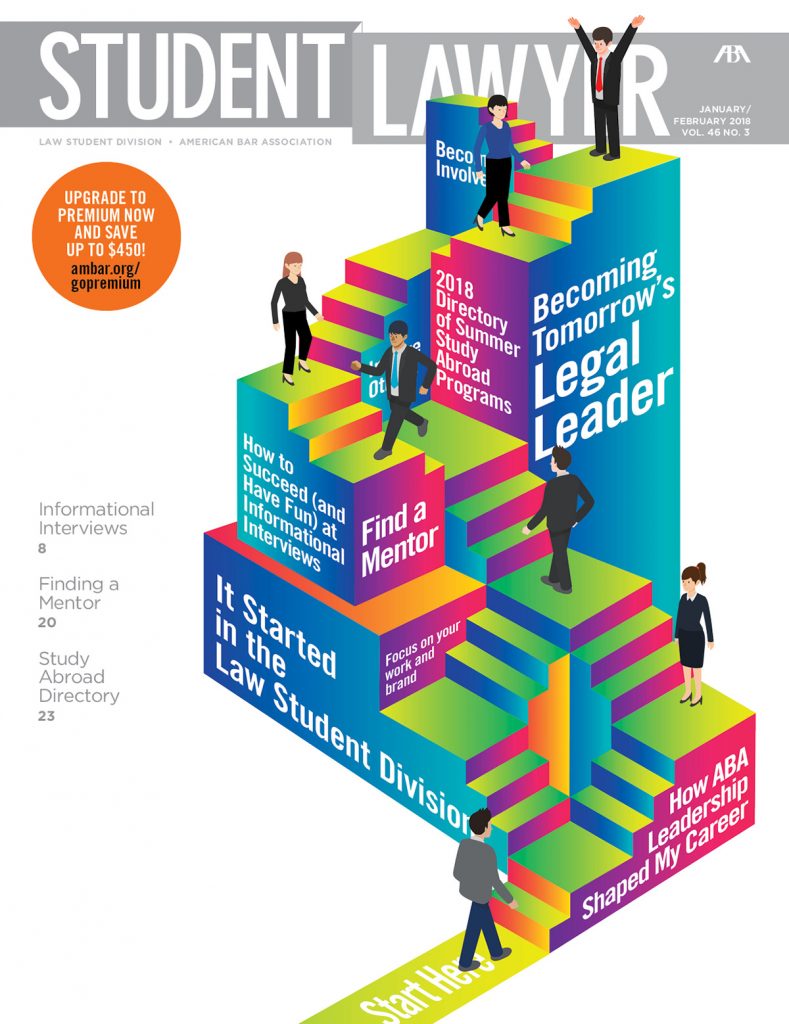 Leadership is a skill that’s essential to most legal roles. As student now and shortly a new lawyer, you may think you’re not qualified to assume a leadership role today or when you land your first legal job because of youth, inexperience, or your short tenure on the job. However, you don’t need to have the authority of a position to lead. Here are strategies that can help you develop strong leadership skills and avoid common mistakes along the way.

It started in the Law Student Division

It began in 1976 when I was the American Bar Association’s Law Student Division representative for my law school. It—meaning my active involvement in the ABA— has continued for the past 41 years. And it has positively impacted me as an attorney and a person.

You’re busy with school. The bar exam looms, and career choices are pending. You’ve got no time to think about how the American Bar Association fits into your world right now. Maybe you can get to active involvement with the ABA later. I completely understand that mentality. But based on my own experience, it may mean that you’ll miss out on opportunities that could, literally, shape your career.

One of the most rewarding ways to spend your summer as a law student is a study abroad program. Here you’ll find our comprehensive directory of study abroad options for law students.

Finding a mentor: You don’t have to go it alone in law school

You’ve got your head down, and you’re focusing on your course work. Good plan. But it’s also smart to begin building the relationships that will help you plan and pursue your legal career goals. One way to do that is by finding a mentor who can help guide you down the smartest path.

Jobs
How to succeed (and have fun) at informational interviews

While they’re interviews, informational interviews are quite different from traditional job interviews and, without a doubt, shouldn’t cause any nail biting or sleep loss. In fact, I submit to you that informational interviews can even be considered fun. Yes, I understand I’m a long-time lawyer, so perhaps what I can consider fun might differ from what law students might consider to be fun; but in terms of career decision making, I stand firmly behind that statement.

Head of the Class
Designing dreams for ailing children

Teal Johnson has a thing for turning dreams into reality. Johnson, a Wisconsin native and 3L at Syracuse University College of Law, is a founding board member of Designing Dreams.

I Wish I’d Known
Put away your ladder

Up until now, you’ve been climbing a ladder. You got good grades in high school, which helped you get into a good college. Then you worked hard in college so you could get into a great law school. The rungs on your ladder have run out, and if you keep trying to climb a ladder, you’ll be selling yourself short.

Allowing more students to have a voice

Now that 2017 has drawn to a close, it’s clear that 2017 was a year of significant achievement for the ABA Law Student Division. Together, we empowered 120,000-plus law students. We implemented a caucus system where all law students can assemble and advance legislative interests. We revamped the division’s communication operation by creating an editorial board. And we promoted justice for all by leading efforts to remove bar admission barriers for undocumented law students.

Law School Nation
News from law schools across the country including a new child-abuse prevention program, DACA assistance, an animal law legal clinic, and defending the rights of military veterans in Massachusetts.