This is the latest in a series of Quimbee.com case brief videos. Have you signed up for your Quimbee membership? The American Bar Association offers three months of Quimbee study aids (a $72 value) for law student members. And if you go Premium, you’ll receive Quimbee Legal Ethics Outline (a $29 value) as part of our Premium Legal Ethics Bundle. Ready to go all in? Go Platinum and get 3 years of unlimited access to Quimbee and 3 years of ABA Premium membership (nearly a $1,000 value) for just $499.

James Obergefell lived in Ohio with his partner, John Arthur. The couple wanted to get married, but at the time, the State of Ohio forbade same-sex marriage. Obergefell and Arthur traveled to Maryland to get married.

Later, Arthur, who had been ill, passed away. The State of Ohio refused to list Obergefell as Arthur’s surviving spouse on the death certificate. Heartbroken and outraged, Obergefell sued the state.

The plaintiffs petitioned the United States Supreme Court for certiorari. The Court took up the case to answer two questions: whether the Fourteenth Amendment obligated states to issue marriage licenses to same-sex couples and whether states were required to recognize same-sex couples’ legal out-of-state marriages.

A sharply divided Court answered yes to both questions.

Justice Kennedy, writing for the majority, concluded that the right to marry is a fundamental liberty guaranteed by the Due Process Clause and supported by the Equal Protection Clause. Four justices dissented, each writing separately and sometimes colorfully, to argue that the question of same-sex marriage should be decided through the democratic process, not the judicial one.

Despite these objections, Obergefell v. Hodges, 576 U.S. ___ (2015), was a watershed case in American history, granting same-sex couples the right to marry nationwide. 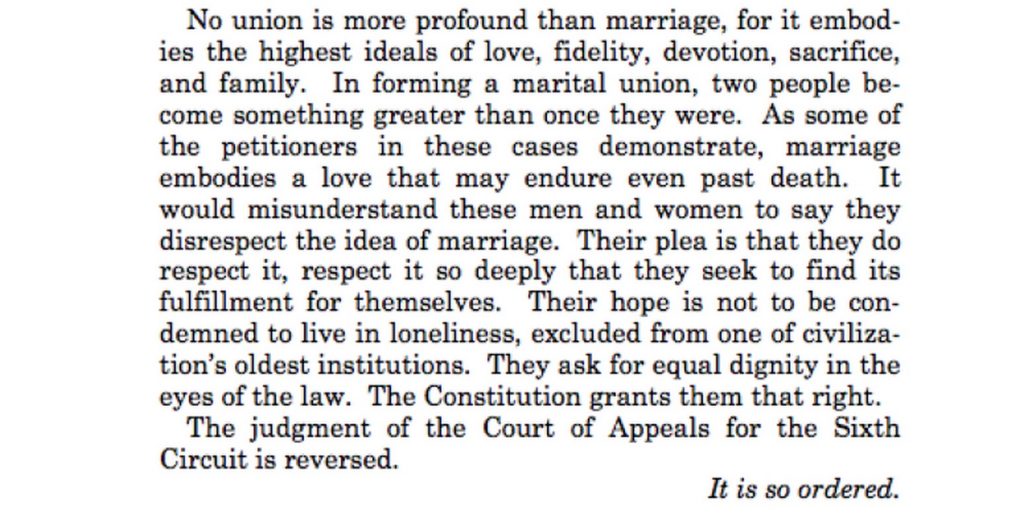