Home » Student Lawyer Blog » Women in Law » Pain at the pump: Why law schools need to do better for breastfeeding students

There I was sobbing in the bathroom of my law school.  It was early in the spring semester of 1L year, I was four weeks’ post-partum, surviving on 3-4 hours of sleep a night, and I had spilled my daughter’s newly-pumped breastmilk…in the toilet — her food, her sustenance, what she needed to live. I felt like I failed my child and was the worst mother ever.

In case anyone ever wondered, I’m pretty sure this is where the saying about “crying over spilled milk” came from – it was definitely a nursing mother. But, let’s go back to the first sentence; I was in the bathroom. Why in the world was I pumping in the bathroom? Isn’t that unsanitary? I wouldn’t eat my lunch in the bathroom, why would I prepare the food for my newborn child in there?

I’ll start from the beginning.

Just a couple months before I was to begin my 1L year of law school, I found out I was pregnant. We had wanted a baby, but it proved difficult for us, so this was a very welcome surprise. I have two other children, and my previous pregnancy was 13 years ago, but I pretty much knew what to expect.

I evaluated my options. I had already been accepted, committed to my school and finally fulfilling my dream. Not attending just wasn’t an option. I did a Google search of pregnancy in law school and found a couple old blogs that seemed slightly reassuring it was possible to go to law school while pregnant. I can do this. I’m determined to do this. I had already planned on being a full-time law student mother, so what was one more?

In the first week of classes, I made an appointment with the Office of Student Services at my school. I needed information about how much time I could take off around my due date in early February. Plus, I chose to breastfeed, so I needed a place to pump while at school.

I was not, however, prepared for what I was told. After all, this is the 21st century in the midst of a women’s rights movement.

First, I was advised to drop my full-time status and go part-time because it was just going to be too hard. This was not an option for me because I did not want to extend my education another year. With soon-to-be three children, I was going to need to start my career sooner rather than later. So I declined dropping to part-time (more than once during the meeting), all while attempting to hide my offense to this suggestion. I knew I could do it. After all, law school was going to be my full-time job and mother’s work full-time outside the home all the time.

The school has a strict policy on absences that does not allow a student to miss more than 20 percent of classes, including for medical reasons such as giving birth. Ok, so what is 20 percent? I calculated it and found that I could miss two weeks of classes. I could take two weeks off to give birth, but could not get sick, let my other children get sick (including the one on the way), or miss for any other reason.

Yikes! Fine, I’ll do what I have to and pray for an easy delivery with no complications and not miss any more classes for any other reason.

However, I still needed a space to pump breastmilk.

I informed the student services coordinator of my desire to breastfeed and my need for a place to pump between classes and on breaks. I was told there was no such space on campus and that students in the past have used the bathroom.

Um, what?! I was confused. Wasn’t there some law that required they provide me a place to pump? Nope. I wasn’t an employee, so I was not covered there, and the school is a private law school that does not receive federal funding, so I wasn’t covered under Title IX either. The school simply had no obligation to provide me with a space to pump breastmilk. 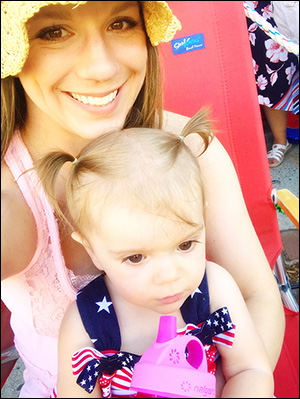 So, I returned to school just over a week after my little one made her appearance in the world, and I began pumping in a bathroom stall. It was a nightmare, but I didn’t have a choice. I held up the large bathroom stall (because it had a power outlet) for over 30 minutes at a time, carefully tried to keep everything as sanitary as possible, lugged my breastmilk to the student lounge fridge, washed my equipment in the lounge sink, and carried around an extra bag full of pumping equipment. I survived the semester and even returned in the fall, still pumping for my daughter.

One of my female professors heard about my bathroom situation and graciously offered her office for me to use whenever I wanted. Hallelujah! She would even leave her office to give me privacy. She helped advocate for me to the Assistant Dean. The administration finally provided a room where I could pump, but with stipulations – I could only use it at certain times, because adjunct professors used the office in the late afternoon and evenings, and I did not have independent access. Instead, I had to get administration to unlock it for me anytime I wanted to use it. It still wasn’t ideal, but it was better than the bathroom and I was grateful. This got me through until my daughter weaned from breastmilk later that semester.

It turns out I wasn’t the only one facing these problems. At the beginning of my 3L year my mentee told me she was pregnant, would be pumping, and wanted to know how I did it. I knew one thing for sure – I didn’t want her or any other law student/nursing mother to experience what I had.

I knew I had the ability to help influence positive change for law students through my role as the ABA Law Student Delegate of Programming, and that is what I intended to do. In my research, I discovered a large number of law schools did not provide a room for law students who were nursing. Some did – though very few private schools offered sufficient accommodations for nursing mothers. More, though still not enough, public schools provided them because of Title IX requirements due to their receipt of federal funding.

In my opinion, along with the Law Student Division’s leadership, all law schools should all be required to provide this essential accommodation. Even if they are not required, I hope that administrators will realize the tremendous burden felt by nursing mothers and work to offer simple, common-sense solutions for this problem. Law schools should not pressure women to choose between their education and having a family, nor should they find obstacles in their decision to breastfeed – or feeling like that choice has been taken away.

Through continued efforts, my school agreed to provide a room for nursing mothers. Now, my goal is to advocate for other law schools to follow suit and not force a woman to choose between her right to parent and her right to pursue her education.

I want law student parents to know they are not alone. Law students need to have the knowledge and courage to stand up for their needs. You have the power to institute change in your law school, whether it is for yourself or a future law student. I encourage you to talk to your SBA President, your law school dean, and student services to bring recognition to the importance of law student mothers having a space to pump and store breastmilk – and for that space to not be a restroom stall.

The Law Student Division is working to bring this issue before the ABA House of Delegates to urge all ABA accredited Law Schools to provide a place for nursing mothers to pump and store breastmilk and will continue to advocate for the rights of all law students. Together we can reach this important goal.