It is a significant achievement that women have caught up in terms of law school enrollment – for the second year in a row.

We at Enjuris make it a point to examine gender breakdown in law school enrollment, because female representation in the personal injury industry is an important topic to us. While more women are enrolling in law school, they are still underrepresented in the industry – especially in leadership positions. The New York Times points out that women make up less than 20% of partnership positions at prestigious firms. That article cited a report by Ohio State University’s Moritz College of Law, which illustrated that even though more women are being admitted to schools, those institutions are generally lower-ranked than those where their male counterparts attend. 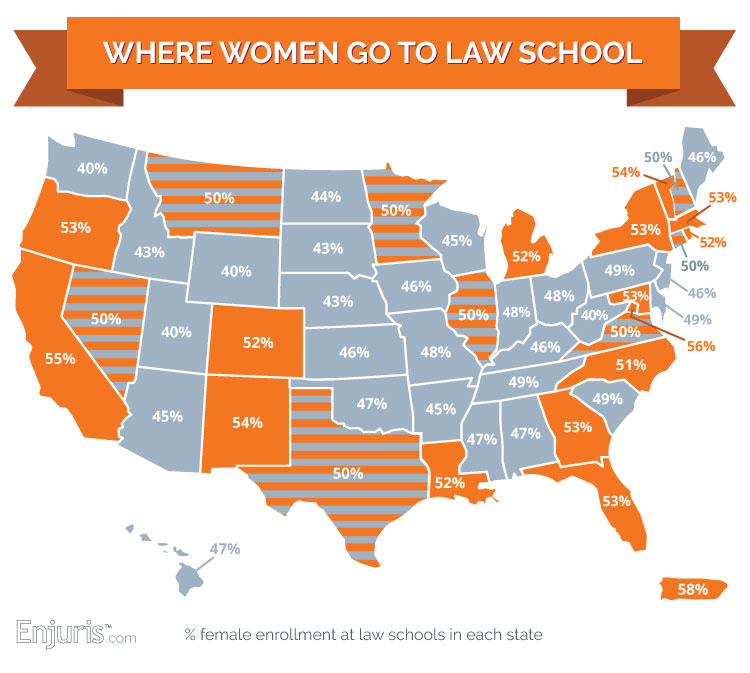 While not in the majority, female representation is growing in the nation’s top-ranked law schools.

Women are attending some fantastic institutions, including UC Berkeley (60.1% female enrollment, up from 58.3% last year), New York University (53.4%, up from 51.4%), and Georgetown University (51.8%, up from 49.4%). In fact, Vanderbilt University, UC Los Angeles, and Northwestern University’s Pritzker School of Law all increased their female enrollment numbers in 2017. However, the other top 20 schools either stayed the same or decreased their number of female attendees. Click here for last year’s data to compare more schools.

In terms of law schools overall, female enrollment increased between 2016 and 2017. The jumps in attendance weren’t large – generally a few percentage points.

Total 1L enrollment is up 0.7% (or 291 students) from 2016, though overall school enrollment is down 0.7%. Additionally, 126 schools reported larger 1L classes, and 77 showed smaller classes. Charlotte School of Law is no longer contributing to 509 reporting, as the institution has ceased operations. Whittier Law School was on the list last year but made the momentous decision to shut their doors because of funding issues. They are the first fully-ABA-accredited school to do this.

What about where women don’t go to law school? There are six schools where the number of male students is quite high. Again, the institutions making up this list is close to last year’s report, though you might find it interesting to note that every school on that list decreased their female enrollment numbers between 2016 and 2017. Literally all of them. 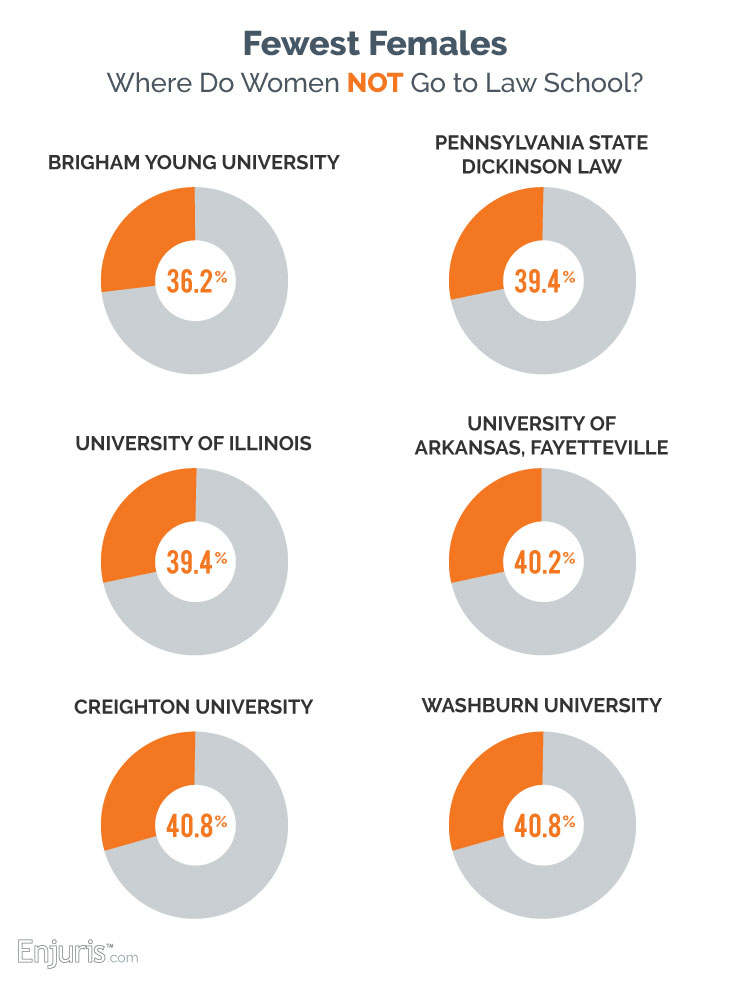 These shifts aren’t huge, and they do not reflect the makeup of licensed attorneys. According to the Commission on Women in the Profession, male practicing attorneys make up 64% of those who practice, while female attorneys make up 36%. Those numbers shrink for Fortune 500 companies, where women represent only 24.8% of general counsel.

There is still much work to be done – but the trend toward more women attending law school can only be a positive one for injury victims who may prefer to work with a female attorney.

Data source: American Bar Association, ABA Required Disclosures (Standard 509 Reports). The ABA reported (PDF)a total enrollment of 110,156 students as of Dec. 15, 2017. Any mistakes in data reported to the ABA are the responsibility of the reporting school. The figures here are as reported on December 16, 2017. Schools may update their data at any time. Please see the ABA website for up-to-date figures.