Following reports of sexual harassment involving a federal judge published by the Washington Post last December, several current law clerks and I believed that the federal judiciary’s policies were ineffective and needed significant change. As current clerks, however, we are somewhat constrained in our ability to engage in public advocacy; thus, we sought help from former law clerks. While all the members of our group are fortunate to have worked for judges who treat us with respect and value our contributions, many of us knew other clerks who were subjected to abusive chambers environments.

In December 2017, we wrote a letter offering modest suggestions to address workplace harassment in the federal courts, including: revising the Federal Judicial Center’s Law Clerk Handbook and Judicial Conference’s Codes of Conduct; improving the judiciary’s training regarding harassment, confidentiality, and avenues for reporting misconduct; developing a confidential national reporting system; and forming a working group of judges, law clerks, and judiciary employees to further develop ways to address these issues.

We also asked Chief Justice Roberts to address this issue in his year-end report.  At the same time, we began communicating with the Chief Judge of the Ninth Circuit and other members of the judiciary about our suggestions. More than 695 individuals had signed the letter at the time we sent it; and as of today, more than 850 individuals have done so.

The Working Group has also suggested that the Judicial Conference undertake the following changes: 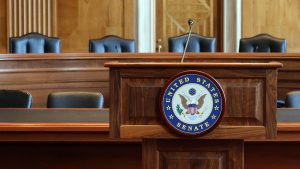 Jaime Santos, Kendall Turner, Sara McDermott, Claire Madill, Priya Srinivasan, myself, and others continue to encourage any interested individuals to reach out to us with additional feedback concerning the judiciary’s policies.

You can watch Wednesday’s hearing live on C-SPAN at 10 a.m. EDT.