Since a young age, I have been drawn towards the understanding of other cultures and have had a desire to experience those cultures in their native land. It is a belief of mine that when we as individuals remove ourselves from our comfortable environments, we can achieve a better understanding of ourselves.

When writing this article, I asked myself, “Why did I choose to study abroad in Africa?” Was it to connect more with the imaginary motherland or to embrace the resilience and strength of the African people?

Many South Africans suggest Nelson Rolihahla Mandela displayed a spirit that remained unbroken. After 27 years of imprisonment on Robben Island, Mandela helped construct and sign the final draft of the South African Constitution. His tenacity helped free the indigenous people from the horrors of Apartheid. During his presidency, he wished to provide his country a more deserving educational structure. Furthermore, on the of July 16, 2003, in a speech titled “Lighting your way to a better future,” Mandela spoke at University of the Witwatersrand in Johannesburg, South Africa, in which he stated, “Education is the most powerful weapon which you can use to change the world.”

Nelson Mandela has left the world an important legacy. It is a legacy which is led by the respect of education. His vision lives through the Mindset Network organization.

“Tools to Change Our World,” a book written by the Center for Community Health and Development states:

In other words, if human beings are the problem, we are the solution. Without knowing who we are and why we are the way we are, we will never establish positive change in our society. Also, I believe with an open mind and a desire to understand one another, we can effect lasting change. Moreover, I have been fortunate enough to befriend individuals who are first-generation American citizens from various nationalities. My relationships have taught me that one culture is not superior to another, and our progression as a human race rests on embracing this truth. Instead, it is through our uniqueness we find answers to which we seek as a human race.

For example, in getting to know the South African people, these ideals held true because they were not judgmental of my culture and nationality. Our focus as a human race should not pertain to the nationality of a person but instead to what each individual stands true to represent. When breaking down the walls of discrimination against our differences, a pathway of clarity can lead to positive change. 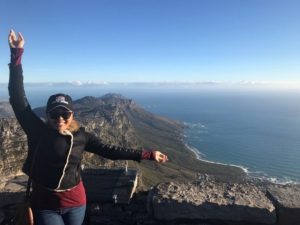 As a student studying aboard at the University of Western Cape in Cape Town, I was under the direction of Professors Ziyad Motala, Thomas Place, and South African Justice Zak Yacoob by way of Howard University School of Law.

While being exposed to a legal education from a historical perspective of South Africa, my group, which consisted of 40 American law students and 15 South African law students, were asked to draw reference and compare not only the United States but criminal procedures throughout the world. We did this placing an emphasis the ending of the Apartheid and the South African democracy.

Although most of our learnings were held within a classroom, it was through deep discussions with my South African classmates and daily excursions in which the enlightenment began. Together our group had the pleasure of exploring the beauty of Cape Town through numerous activities which included: hiking Lions Head mountain, touring Robben Island, and embracing the colorful neighborhood of Bo-Kaap. We visited the District Six Museum, which provided pre-Apartheid historical details. This included the understanding of those effected by forced removal based on race as it relates to housing.

We toured the township of Langa, which is a suburb of Cape Town created solely for black South Africans during the Apartheid era. During this time millions of people were forcibly removed from their ancestral homeland and relocated into one-way in, one-way out towns. Touring the township was a painful and enriching experience, one that will not be forgotten. The Apartheid system reigned from 1949-1991. The aftermath still resides throughout the country, a history comparable to slavery in the United States.

As intellectuals soon to enter into the legal field, we often pondered if it was foreseeable in the near future for the American government to make a progressive shift towards a stronger commitment on human rights. These discussions were focused around the discrimination that the people of South Africa endured.

Not only did I have these conversations with legal scholars, I had them with my Aunt Assunta. I am humbled to know God connected my mom Connie Brown and the late Assunta Santora many years ago, allowing them to develop a lifelong friendship which provided me a mentor and a friend. She was someone I could call anytime and in any state of mind, whether it was for advice, laughter, or to lecture me. She encouraged me to build a door when there was not one provided and reminded me to run my race ignoring the judgments of all others. Our conversations varied from commercialized American religion, African-American authors of the 1920’s whose voices were silenced, to plant based diets.

Most of us have a list of people we call in case of an emergency and during celebration, Assunta was on both of my lists. As she was excited to hear of my adventures in Cape Town, I know she will encourage me on my next trip because she lives within me.

Rest in peace Assunta Santora, may your legacy continue to live within those you touched, and may your spirit rest with God.