It was 2:30 in the morning on a Tuesday late last November, and there were seven people in my bedroom. For some people, that might be the beginning or end of a great evening. But this bedroom ensemble included two cops, two paramedics, a medic trainee, my wife – and in the middle, with a tangle of wires, was me. And I was having an EKG.

I was also having my latest panic attack.

This wasn’t my first, and it wasn’t my worst, and it came from out of nowhere. I’ve been experiencing them since the summer of 2009, when I was working at a newspaper in the Sun-Times group.

Unexpected people in many professions have gone public with their panic attack tales. NBA star Kevin Love wrote his story for The Players’ Tribune:

I was running from room to room, like I was looking for something I couldn’t find. Really I was just hoping my heart would stop racing. It was like my body was trying to say to me, You’re about to die. I ended up on the floor in the training room, lying on my back, trying to get enough air to breathe.

The next part was a blur. Someone from the Cavs accompanied me to the Cleveland Clinic. They ran a bunch of tests. Everything seemed to check out, which was a relief. But I remember leaving the hospital thinking, Wait … then what the hell just happened?

NHL goaltender Robin Lehner wrote about his panic attack and struggles with alcohol, drugs, and thoughts of suicide for The Athletic:

Towards the end of the period, things started to get blurry and I couldn’t focus. I felt very fuzzy, but I battled like I always did. The scoreboard clock was ticking down so slowly. I just wanted to get back to the locker room. When zero finally hit, I walked back and sat in the trainer’s room. I could barely get my gear off. I broke down. I was having a major, full-blown panic attack. I thought I was suffering a heart attack. I had no idea what was happening. I could not go back on the ice.

Now, despite nearly 30 years of living with depression, suicide is not something I’ve contemplated – though one time while distracted by a particularly bad evening in college, I almost walked into traffic. And, after a year and a half of drinking heavily, I gave up alcohol for Lent in 1995, went on spring break in Panama City, and realized that drunks look like idiots, and I didn’t want to be one anymore.

My generalized anxiety disorder is under control most of the time – until it’s not. That’s the way this dance works.

And this user guide will give you an introduction to the steps of the dance – your beat may vary.

STEP 1: A small annoying inner voice steps up to the microphone.

Your personal troll that occasionally takes over your internal monologue can be a key contributor to the start of a panic attack. It’s that voice that tells you nobody likes you or that whatever you do isn’t good enough. Or that pain in your elbow is the start of a heart attack.

It’s a whisper. Then, all of a sudden, it’s a cacophony of overlapping whispers. All of them bad.

Sometimes, the part of me that’s always striving for balance can grab the reins of the conversation. If I can’t, the dance moves on to …

The chest constricts. Claustrophobia sets in. Stomach pains. Every muscle in the body gets ridiculously tensed. Breathing gets harder. Just imagine instantly becoming petrified Neville Longbottom in the first Harry Potter film and you get the idea.

There’s a wave of dizziness, and then a larger wave of confusion as you wonder what to do – maybe you should ask for help, or should you grab a Xanax, or is it time to call 911? Or do you just throw up? This is the time to acknowledge that something is indeed wrong. You have to get moving – because you don’t know what else you can do – and it’s time for…

Not all of you may have heard of Monty Python. The Ministry of Silly Walks is the name of a sketch of theirs which looks a little like this:

I also look like this at this point of the panic attack.

I know that I need to move, be it toward a phone or a bathroom or the little bottle of pills set aside for this occasion. But, being petrified, they aren’t working in unison or at all. So my body is fumbling about , limbs flailing, and generally being useless and in its own way.

On the night of the bedroom party, my knees were doing the Jimmy Stewart dance from “It’s a Wonderful Life.”

I was of no help to anyone, including myself.

Over the years, there have been any number of methods that have worked to get me back to a state of functional anxiety.

That’s the scary thing about panic attacks – they look like so many other things that it can be hard to tell that’s what’s going on. Love and Lehner both compared theirs to a heart attack, which is common. To get to the panic attack diagnosis after roughly 6 months of this, I’d had:

On the good side, between the EKGs from 2009 and 2017 told me that my heart was behaving better than the paramedic giving the test. So I’ve got that going for me.

But it took a while to determine what it was a key part of the problem was – low serotonin in my stomach.

Solutions and more problems and side effects

Most people have heard that serotonin in your brain makes you feel good. But your brain only contains 5 to 10 percent of the body’s serotonin. The rest is in your stomach. And most of my early panic attacks were preceded by severe stomach cramps and nausea.

As a result, by the time November 2009 had set in, I had lost 50 pounds because eating had become painful and unpleasant. My doctor nearly congratulated me for my weight loss. I told her, “There’s no good reason for it. And I’m worried.”

Eventually, she started me on Lexapro, a selective serotonin reuptake inhibitor (SSRI). And that seemed to calm things down. Over the last nine years, we’ve adjusted the dosage. And I haven’t had any conscious full-blown panic attacks in years. Though I have gained back all the weight I’ve lost and then some.

The side effect of the Lexapro has been at times entertaining – weirdly frequent and vivid dreams. Think “Inside Out,” only far weirder at times:

#LastNightsDream: I was named chief legal officer of a major corporation. pic.twitter.com/QjWxkXhB…

In the last few years, my red-alert panic attacks have come out of a dead sleep at a point where I’m already passing Step 2 and hitting Step 3 in stride. None of the mindfulness tricks work. All I can do is ride it out, take a Xanax, and gauge how bad and how long it’s going to be.

The night of last November’s dance party, I was having some weird X-Men fight dream when all of the characters suddenly hid as something dark that should not have been in the dream appeared. That’s when I woke up, and the party was already started.

Look, no one can just decide to be happy. You can work on it and take steps toward your own happiness. But this is something that you carry with you at all times – some days, the dragon wins.

Am I anxious? Sure, but not all the time. Definitely no more than 2009, when the Sun-Times was in the midst of a bankruptcy where pay and job cuts were a near guarantee. And I don’t lie to myself that my emotions are a big part of an equation that a pill can’t fix.

Does it get in the way of life? At times. There are occasions where I find it hard to focus on things when the anxiety kicks in. I’ve been working in news for 30 years and online for 23 years. My career is older than some 1Ls at this point. And since everybody knows more about the law than I do, there’s a big streak of Impostor Syndrome I run up against. But on the other hand, it makes me really happy every time a law student I’ve talked or worked with passes the bar exam.

Everybody has to form as healthy a relationship with your personal anxiety troll as you can get. And occasionally, you eat your feelings. 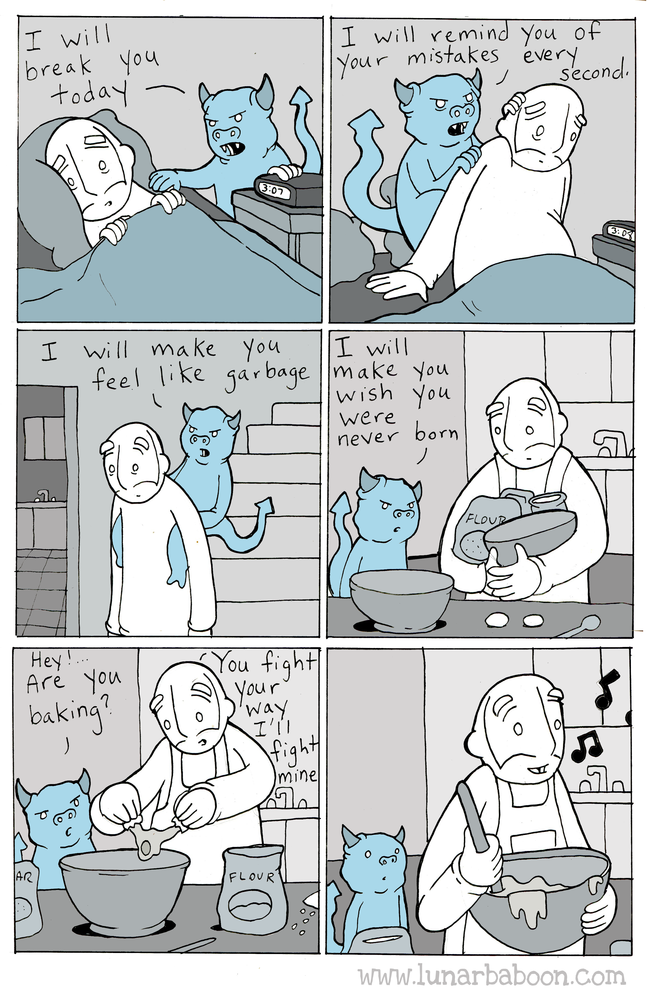 Is a panic attack a sign of weakness? Hell no.

I started this post a while back because a Florida legal friend shared her experience of an attorney in the throes of a panic attack in the middle of a trial:

Male attorney had a panic attack and I sat with him & went through all the steps that I try to go through when I have one (like breathing techniques) with him. Had to convince him multiple times that he wasn’t a “weak ass bitch” for having one. His words. Not mine. ?

Getting help for a panic attack absolutely does not make you weak. This is your mental and physical health I’m talking about. If you had a cavity, you’d see a dentist. If you have a panic attack, start with your family doctor or general practitioner. It might take a while, it might be frustrating, but things can get better.

Mental Health Week is one of the most important things I do here at the ABA, be it finding great professionals to present new coping strategies or providing a judgment-free zone for law students to share their stories. We’re also working to make it easier for law students to get help and end the stigma of doing so.