Your first final exams are coming up, 1Ls! It’s time to mind your minutes, study the past, start formulating answers, and pay attention to your professors – and get that first good grade.

Make a schedule and stick to it.

Studying for exams can feel overwhelming for many reasons, not the least of which is that it can be difficult to figure out how to study for three or more exams at once. First-time exam takers often make the mistake of spending too much time studying for the first exam and failing to leave enough time to study for later ones. Making a schedule and sticking to it will help ensure that you devote enough time to all subjects. 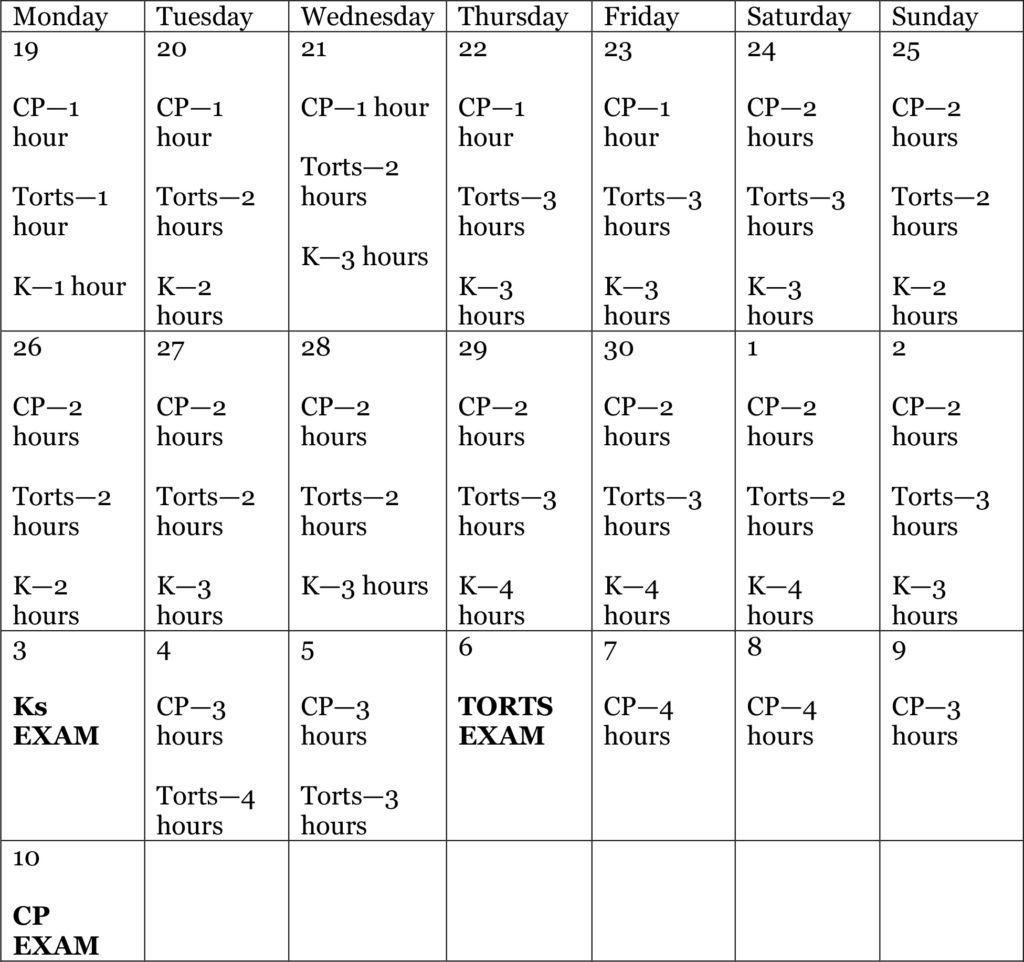 Note that this sample schedule has you studying every day between November 19 and the final exam on December 10, so if your exams start earlier or you need or want to take a day or two off during that period, you’ll have to adjust the schedule accordingly.

Use old exams or online practice questions to study.

If your professor makes old exams available to students, USE THEM. They are the best resource you have for what the professor’s tests “look” like and topics that the professor tends to test on. If the professor provides sample answers, resist the urge to look at them before you’ve practiced drafting your own answer using the method I describe below. Trust me when I tell you that many students read a practice question, read the answer, and are sure that they could generate something similar. And maybe they could. But writing an organized, structured answer isn’t as simple as it seems and often takes longer than you think it will. Your first exam should not be the first time you’ve written out a complete answer.

Take time to outline the issues you want to address.

Both in practice and on the exam, resist the urge to start writing immediately. Outlining has many, many benefits. First, it helps you appropriately structure your answer, which will maximize the credit you receive. Second, outlining also keeps you from forgetting to include elements or arguments you need to address. Exam-taking is stressful, and it’s easy to spot an issue in the initial read-through and then forget to include it in your answer. Outlining also has another benefit. If you realize you’re running out of time, you can easily bullet-point remaining issues that you’ve included in your outline. You probably won’t receive full credit, but at least you’ll gain a few additional points by showing the professor that you spotted the issue, know the law, and have briefly thought about how it applies or doesn’t.

I recommend that students write essays on long hypotheticals using a modified IRAC/CREAC/CREXAC (I’ll call it CREAC) formula. Once you are ready to start writing (see below about outlining first), state the conclusion you have reached on the question asked (the C). Then state the law or rule (the R), and state it explicitly, referring to statutory language, common law, or both. Some examples:

Note: numbering elements is very useful because it enables the reader (your professor) to easily see that you know the black-letter law.

After you get all the relevant law down, you will skip what we typically call the rule explanation (unless your professor has told you that rule explanation should be included). You won’t be expected on an exam to spend time giving the facts and reasoning from a case you studied during the semester. So, for example, you’ll likely explain the International Shoe test when analyzing a specific personal jurisdiction issue, but you won’t be expected to recite the facts of that case and explain why the majority reached the result it did. So, you’ll leave out the Rule Explanation (E) of your CREAC structure.

Once you have the rule/law on paper, go directly to the analysis/application (A). Be sure to explain how the facts of the given hypothetical either apply or don’t to each statutory or common law element. The call of the question (see below on answering the question asked) may ask you to make the best argument for one of the parties, in which case you’ll just use the hypothetical facts that are most favorable for that party. Or you may be asked to predict what a court will do, in which case you should give the facts that support both sides of the argument and make a prediction, perhaps pulling in policy arguments to suggest why one party’s position should prevail. Then give a sentence or clause restating your conclusion (the final C). Something as simple as “Thus P cannot state a claim for IIED.” will suffice. But if you’re running short on time, don’t worry about either conclusion—just give the rule (R) and analysis/application (A).

Some exam questions will likely be broad and others narrower. Look for the call of the question before you start reading the facts and read the call carefully. Professors sometimes throw extraneous facts into a hypothetical to test your ability to sort through lots of information and discern what is important and what isn’t. For example, you might spend 10 minutes reading and thinking through a contracts hypothetical to realize that the question is only directed at whether consideration exists. Or worse, you might spend 45 minutes answering that question by going through every element of contract formation and then not have enough time to answer other exam questions.

I know that the temptation is to dive in immediately, but before you do anything else, read the call of the question and make a note about what you are being asked. If the question is narrow, you will know to look for facts in the hypothetical that speak to that issue and avoid getting distracted or tricked by facts that are extraneous. For example, consider the following questions:

These are two different questions that call for two different approaches. The first asks you to predict what the court will do while the second asks only for the Defendant’s best argument. In answering the first, you’ll outline the law, talk about both parties’ positions, then predict which will prevail. In answering the second, you’ll still outline the law, but you will focus only on the Defendant’s best argument. In the second, you aren’t asked to make a prediction about the outcome, though it’s still probably worth mentioning whether you think the argument is strong or weak.

Just remember that you likely won’t receive credit for spotting issues that you weren’t asked about (non-issue spotting), so don’t waste time mentioning law or facts that aren’t relevant to the question asked. For example, both questions above ask solely about subject matter jurisdiction, so addressing personal jurisdiction or venue won’t get you any points.

If your professor has given different advice, follow it!

Some professors are particular about what they are and aren’t looking for in exam answers, so if any of the advice above differs from what your professor has told you, obviously, you should follow your professor’s advice.