Home » Student Lawyer Blog » Women in Law » Where do women go to law school? Here are the 2018 numbers

For the third year in a row, women once again outnumbered men in law school classrooms across the country in 2018, according to the most recent data released by the American Bar Association.

At Enjuris, we make it a point to pay attention to gender enrollment in law schools because we believe female representation in the personal injury field is important to the legal field and society at large. With that in mind, let’s take a closer look at law school gender demographics in 2018. 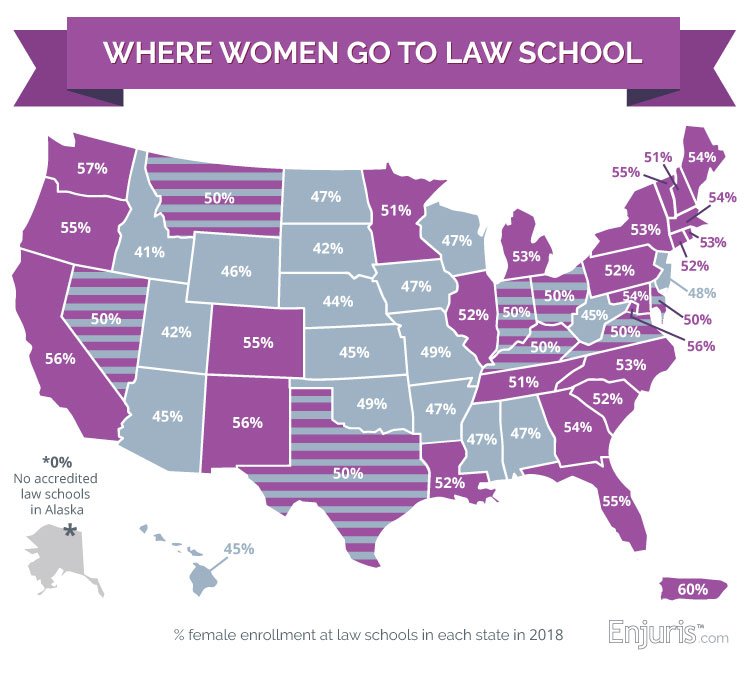 In 2016, the number of women enrolled in juris doctorate programs moved past 50% for the first time. In 2017, that trend continued with women making up 51.3% of all law students.

In 2018, the data once again reveals that more women were enrolled in law school than men. Specifically, females made up 52.39% of all students in ABA-approved law schools.

The number of women enrolled in law schools increased for the 3rd year in a row in 2018.

While the number of women enrolled in law school continues to grow, women are still underrepresented in the industry—especially in leadership positions. According to a 2018 report from the American Bar Association, women made up only 22.7% of partners in private law firms (based on 2017 data). 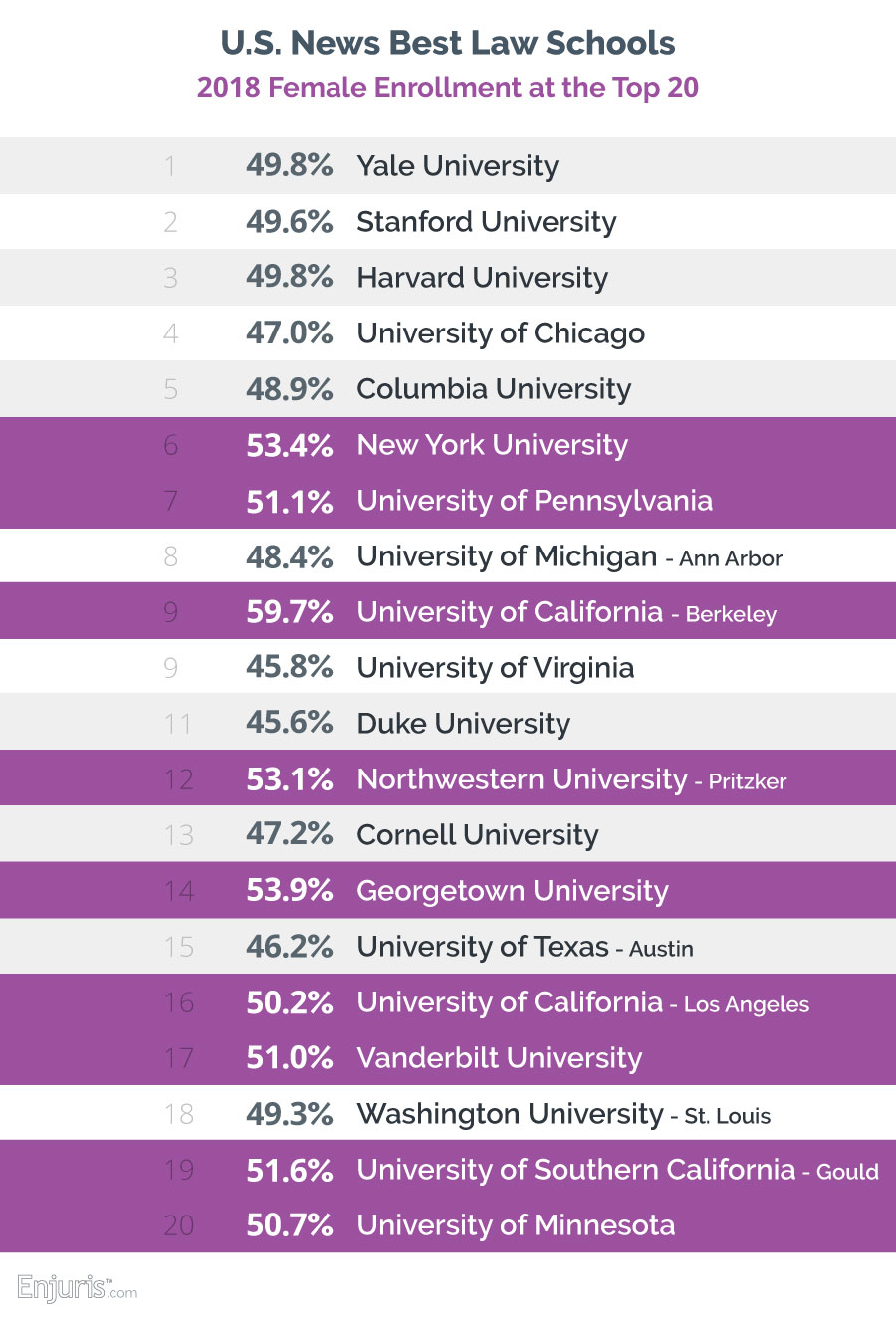 Further, the percentage of women serving as general counsel for Fortune 500 companies was only 26.4%. The numbers are similarly dismal for law school deans (32.4%) and federal and state level judges (27.1%).

Female enrollment in the best law schools as ranked by U.S. News & World Report for 2018

Perhaps the most interesting statistic to come out of the 2018 data is that more women are enrolling at top ranked law schools.

As for the notable changes from last year’s report, Howard University School of Law is no longer the top law school in terms of female enrollment (though the school continues to be in the top 10). North Carolina Central University is now the top law school by female enrollment (66.85%), followed by Atlanta’s John Marshall Law School (66.21%), and Northeastern (65.76%). 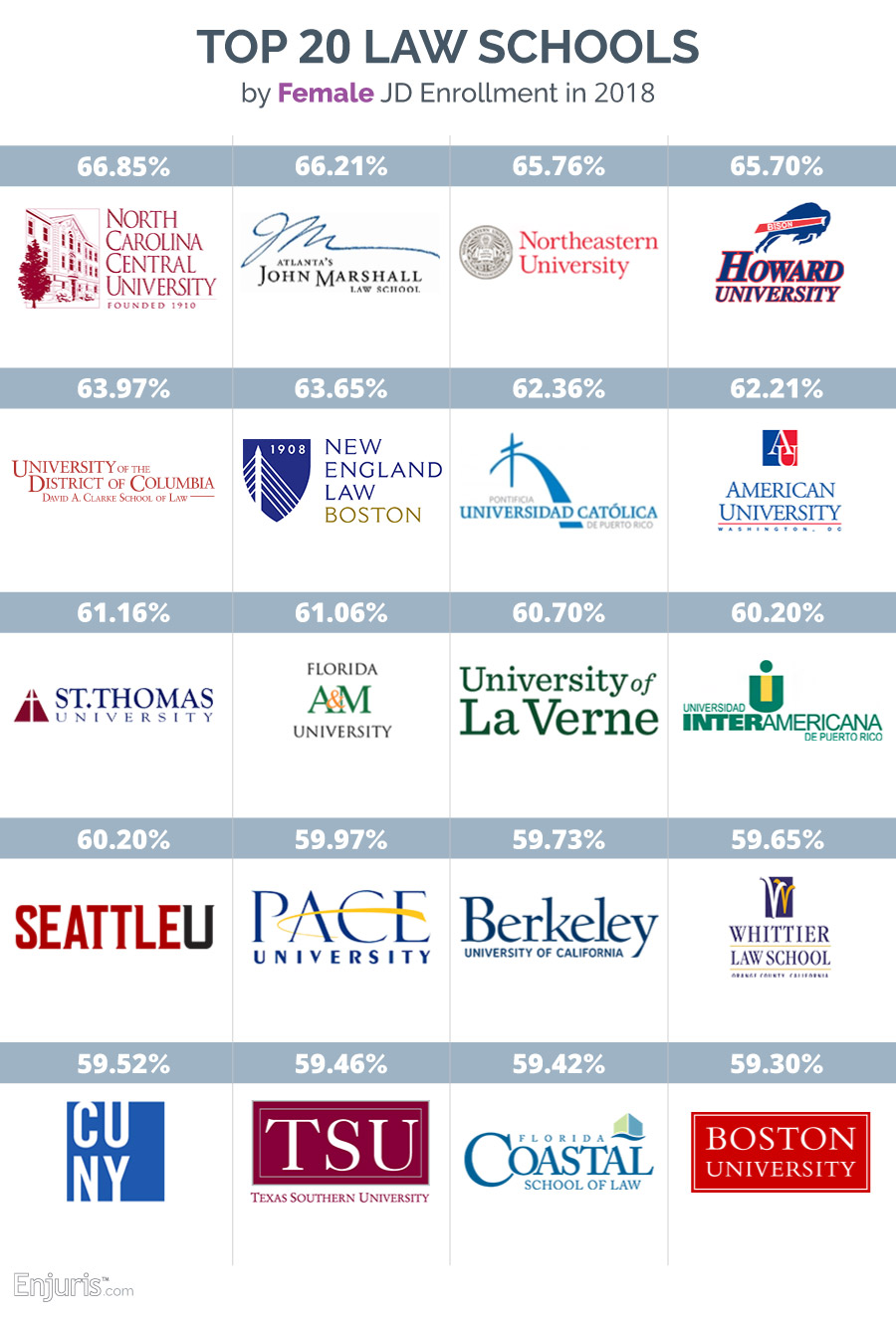 Interestingly, 3 of the top 4 law schools by female enrollment currently have women serving as deans.

Where are women not going to law school? There are 10 law schools where the percentage of male students is quite high. Of these schools, only 3 increased their female enrollment from 2017 (Pennsylvania State – Dickinson Law, Brigham Young University, University of Illinois).

As 2018 came to a close, many people began calling it the “Year of the Woman.” The nickname was inspired in large part by the record number of women that ran for political office in 2018. Interestingly, it appears law schools saw a similar trend.

The shifts described above might not appear to be huge, but they’re significant in a number of ways. More women are attending law school than men for the 3rd year in a row. Furthermore, the number of women attending the top law schools is on the rise.

Though the true impact of these trends might not be seen (or felt) for a number of years, it seems likely that the percentage of women in leadership positions (e.g., judges, deans, and private law firm partners) will increase as these new female law students graduate, enter the workforce and gain experience.

It’s worth noting that the increase in the number of women attending law schools doesn’t necessarily translate to women having more power in the legal field. In fact, according to a 2017 survey of women in the workplace, less than one in five equity partners are women (even though they comprise 45% of law firm associates), and women are 29 percent less likely to reach the first level of partnership compared to men. Women of color face an even steeper climb. The legal field has more work to do, clearly.

All in all, though, 2018 was a promising year for those personal injury victims who prefer to have the option of working with a female attorney. Indeed, you might call it the “Year of the Woman” for law programs across the country.

Data source: American Bar Association, ABA Required Disclosures (Standard 509 Reports). Any mistakes in data reported to the ABA are the responsibility of the reporting school. Enjuris assumes no responsibility for inaccuracies or for changes in such information that may occur after publication. The figures here are as reported on December 16, 2018. Schools may update their data at any time. Please see the ABA website for up-to-date figures.

This article first appeared on the Enjuris website and is reprinted with permission (and our appreciation).