At the University of Oklahoma College of Law, we have a significant commitment to training students in using innovative legal technology. The goal is to help students know how to use technology so that they can be practice ready as soon as possible. In addition, we are trained in how to do things in an efficient manner, trying to make sure that we are aware of various technologies that are available, while feeling comfortable in using them.

As part of that, I attend as many free lunch and learns as I can (because, you know, unemployed 1L – but seriously, I’m unemployed and actively looking). On Tuesday of this week, a local family law attorney led our lunch session, showing us his app, YourFirmApp, that he was slated to present at the ABA TECHSHOW. The whole goal of this app is to make a client-facing app for attorneys so that they are able to stay in better touch with clients, provide better services, and ensure that client outcomes are realized as often as possible. It integrates with Clio and LawPay to fill in some gaps in those services by providing an easy-to-use client-facing interface to remove some of the barriers to entry and help clients stay on top of their legal representation. 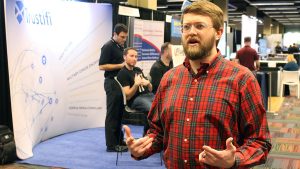 It really is a cool app, and one that I kept thinking about for the rest of the afternoon and evening, mainly because it seems so intuitive. I thought about it so much that I traded emails about the app with its founder.

The next morning, we got on a plane out of OKC, but we barely took off before an ice storm hit and grounded later flights for a period of time.

I got to pitch an app in the Startup Alley at the ABA TECHSHOW after only knowing about it for 29 hours, and only knowing that I was going to pitch it for 30 minutes.

Chris Smith, the Oklahoma City-area family law attorney who had led the lunch session I attended on Tuesday, was on one of those grounded flights. While the OU Law student group got to Chicago later than anticipated because of our own delays in layover cities, Chris’ flights kept being delayed from even taking off out of Oklahoma City.

It became apparent that he was going to make it to Chicago, but his scheduled buffer had been completely eaten up. And there was a very real possibility he wouldn’t be able to make it on time to the ABA TECHSHOW.

Meanwhile, our student group went about our day, meeting with the Allstate general counsel, an OU Law grad, when Professor Kenton Brice, our school’s technology guru, showed me a text from Chris, asking if there was anyone there who might be able to step in and be available to pitch. Chris’ arrival to TECHSHOW was going to come down to minutes.

I jumped at it. I had been thinking about his app since his demonstration to us the day before. After a quick phone conversation with Chris, I started to prep for how this would potentially go.

Chris didn’t make it to the Startup Alley on time. YourFirmApp had drawn the second position for three-minute presentation. So I got to pitch an app in the Startup Alley at the ABA TECHSHOW after only knowing about it for 29 hours and only knowing that I was going to pitch it 30 minutes ahead of time. It was both the shortest and longest three minutes of my life. 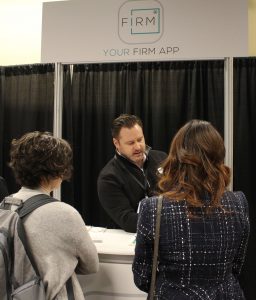 Of course, because of how the day had gone, there were technical issues and a microphone change during that three minutes. The moderators of the Startup Alley called time when there were two slides left, and these were two important slides to show the audience – which integrations YourFirmApp worked with and where to find them at TECHSHOW.

I was honestly pretty frustrated at myself – these were two slides that, if I didn’t get to anything else, I really wanted to make sure that people knew those two key pieces of information. About 5 steps away from the stage, the blood pumping/heart pounding sensation started to slow down. About 10 steps away from the stage, I looked up and saw Chris hurrying through the door. He had missed his pitch time by just over 3 minutes.

His first words to me were “thank you.” That 1L self-doubt, that personal frustration I felt…all of that started to go away. He was appreciative, and later included me in the meet and greet for the other app developers, in spite of the fact that I had done no legitimate work on his app. He actively introduced me to some serious innovators. The perfect pitch from earlier in the day was hardly perfect (there’s a video floating around, from what I’m told…), but his kind spirit helped me refocus on what was important. 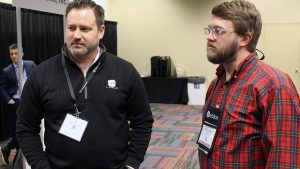 The further I’ve gotten from the experience, the more that I’ve realized that this is the field I’m getting into – we do what we have to do to get the job done, and sometimes we have unexpected collaborations along the way. Sometimes, those collaborations are a little more “pressure cooker” than we might prefer, but that’s okay too. Learning to think on your feet and having to engage those skills in a real world environment can only make you better.

And then, it’s great to take care of each other. I scratched Chris’ back. He could have said thank you and moved on, but he went out of his way to put me in situations in which I didn’t belong. I look forward to being in his position some day, ensuring that somebody who doesn’t deserve to be there can still have that access.

I just hope that it’s not because they have to pitch with 30 minutes’ heads up.