I was introduced to appellate advocacy through my law school’s first year oral advocacy competition. Prior to beginning Syracuse University College of Law, I was largely unfamiliar with “appellate advocacy.” I went to law school to be a litigator and was eager to participate in any type of advocacy opportunity.

One competition was all it took for me to seek out more appellate advocacy opportunities, and I soon learned about Syracuse’s ABA Appellate Team. The school sent students to the ABA’s National Appellate Advocacy Competition to compete against students from across the country.

In college, I had majored in English, and oral and written advocacy had been the main reasons I had gone to law school. Competing on the ABA Appellate Team and arguing a point through a written brief and rounds of oral advocacy instantly appealed to me

My first year competing on the team, I was one of four teammates. We all relied on each other and collaborated to write the brief, with each of us taking a section and focusing on a specific issue. I had no idea how much these skills would translate into practice. It prepared me for the collaborative environment of drafting a motion as part of a team once I began working.

My second year on the team, I was one part of a two-person team. It was just two of us responsible for the brief, and we had to be able to argue both sides of our issues. We also had to have a robust understanding of each other’s issue to ensure the brief was cohesive and to field questions about the other issue during rebuttal.

As much as I relished the thrill of walking up to the podium and advocating, I also enjoyed research and writing. I have always seen researching as an opportunity to learn everything I can about a topic and the position I want to take. Writing allows for a plan on how to methodically deploy that knowledge. I looked forward to the unpredictability of oral argument – especially during competition rounds with hot benches. But being able to hand over a brief laid out with the arguments in the precise way I wanted them was equally gratifying.

The competition issue that year addressed whether Title II of the Americans with Disabilities Act is applicable to the conduct of law enforcement. There was an incredibly rich body of law on the issue, and I tried to devour as much of it as I could. We began researching and writing in early November and never stopped. We were lucky to have professors, local practitioners, and judges who were exceedingly generous with their time and agreed to come moot us.

When it came time to be done with the topic, I knew I wasn’t.

The Manhattan regional was one of the best experiences I had in law school. It was surreal to walk into the courthouse for the Southern District of New York, walk up to the podium, and begin arguing as a law student. We devoted so much time to preparing and to then get up and argue was very rewarding. We received valuable feedback that we were able to incorporate into our arguments as we advanced, and ultimately we ended up winning the Manhattan regional. The moment I realized we were going to nationals was unforgettable.

We celebrated and then turned toward nationals. In preparation, we increased practices. We updated our arguments based on what had worked at regionals, and continued to bring in attorneys and professors with fresh perspectives to moot us.

For nationals, we were supposed to fly from Syracuse to D.C., where the competition was held. We boarded the plane, but were quickly told to get off the plane due to weather. After this happened twice, we rented a car and drove over six hours to D.C. in order to make it for our first round early the next morning. 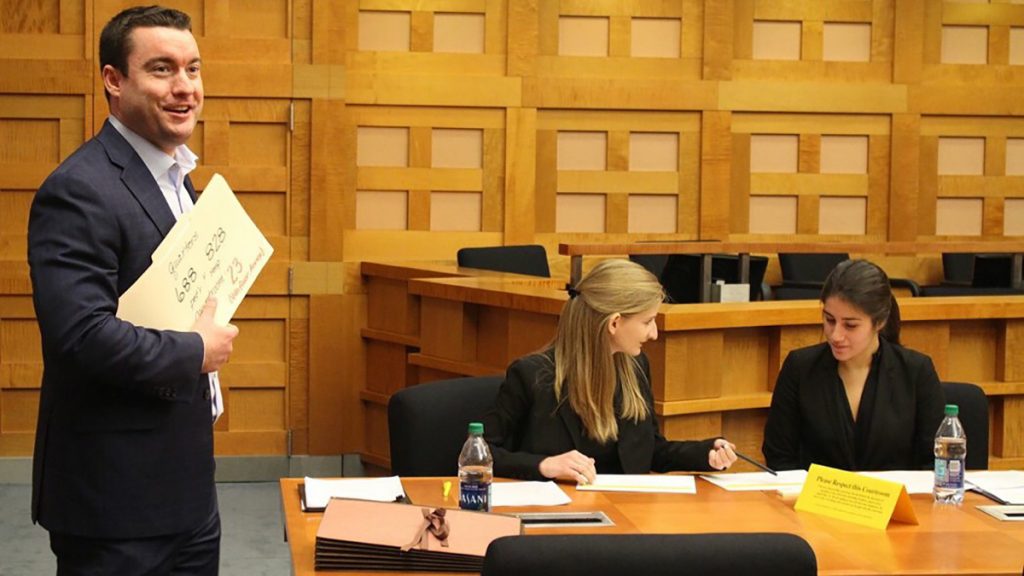 We made it – but we were exhausted. We pushed it aside to argue both rounds our first day, and we moved on to the octo-finals. For quarterfinals, we did everything we could and were thrilled to advance to the semifinals. We did not advance to the final round, and although we were disappointed, ending three years of law school competitions as a semi-finalist at Nationals was an unbelievable feeling.

We had one more excitement in store. At the awards ceremony the next day, we found out that our brief had been recognized as one of the best briefs of the entire competition. We also learned that when the briefs were re-graded for nationals, all of the graders were judges. Just like setting the competitions in federal courthouses, this detail made the competition that much more special.

Nationals ended in April, and I was less than a month away from finals, graduation, and preparing for the bar exam. Although I needed to shift my focus, at this point I had been researching, writing, and arguing this issue for six months. When it came time to be done with the topic, I knew I wasn’t.

The issue I argued was a circuit split. It addressed whether the ADA requires police officers to make reasonable accommodations to individuals with disabilities. Because I argued both sides of the issue, half the time I argued that the ADA required police to always provide reasonable accommodations, and half the time I argued that requiring police to do so would be unreasonable in emergency situations. I felt like neither side addressed all the questions and concerns I had heard during the competition.

Arguing both sides of this issue for so many practices and rounds of competition, I was in a unique position. I was well aware of the strengths and weaknesses of each side. I wanted to write an article advocating for a new approach that combined the strengths of each circuit’s approach without incorporating the weaknesses. The week after nationals, I sat down and outlined exactly what I thought that approach should be.

Between graduation and bar prep, I wrote an article committing it to paper.

Having argued the issue so extensively, I was able to incorporate and address all the questions and concerns I had received during the competition for both sides.

My article on Title II of the ADA was published in The University of Memphis Law Review in April, inspired by the issue I argued at competition. It is one of the many things I am thankful to the National Appellate Advocacy Competition and the ABA for helping to make happen. The team gave me two incredible coaches, both of who turned into invaluable mentors.

My talented and passionate teammates became good friends. I constantly tried to improve as a writer and oral advocate. And I recognized that sometimes hard work doesn’t pay off – but sometimes, it really, really does.