ABA President Judy Perry Martinez is passionate about providing pro bono assistance to those across our nation— and abroad—who need it most. The ABA leader and lawyer at Simon, Peragine, Smith & Redfearn in New Orleans travels to the border of Texas and Mexico regularly to help immigrants and asylum seekers, and here she outlines ways you can help with this crisis, even in your own city.

Due process for all

The first order of business for Martinez after being elected ABA president was a trip to the border with then-president Bob Carlson for a week of pro bono work—and it was so impactful for her that she returned with ABA President-Elect Trish Refo to help even more.

Using the training and tools from Pro Bono Asylum Representation Project staff, Martinez was equipped to help adults, children, and families who were in detention at the border. This program also provides “know your rights” seminars and sessions for detainees so that those who are proceeding pro se have basic information about what the legal immigration process is like.

Martinez witnessed border work being done by local lawyers, ABA staff, and pro bono lawyers from across the nation. The ABA hired a pro bono coordinator who schedules trips for small teams of lawyers to travel to the area and work for a week or so at a time.

“The work that’s being done in that regard is so important,” she said. “That individual team is being trained. But once they sit down with asylum seekers and understand their extraordinary challenges and hurdles and what these individuals have faced as they made this journey—sometimes across several countries, sometimes in the harshest conditions—they return as ambassadors for this work. They tell others they can really make a difference in these people’s lives when they take a pro bono case.”

Studies show that detainees who have counsel have a 10- to 14-times greater chance of being successful in their immigration case. The ABA has taken a position that the right to counsel for these immigrants is critical. Martinez said the experience of going through this process with someone at your side standing with you is, by itself, a significant contribution a lawyer can make.

“Our system here requires due process for all individuals who are seeking asylum, and we should offer them no less,” she contended. 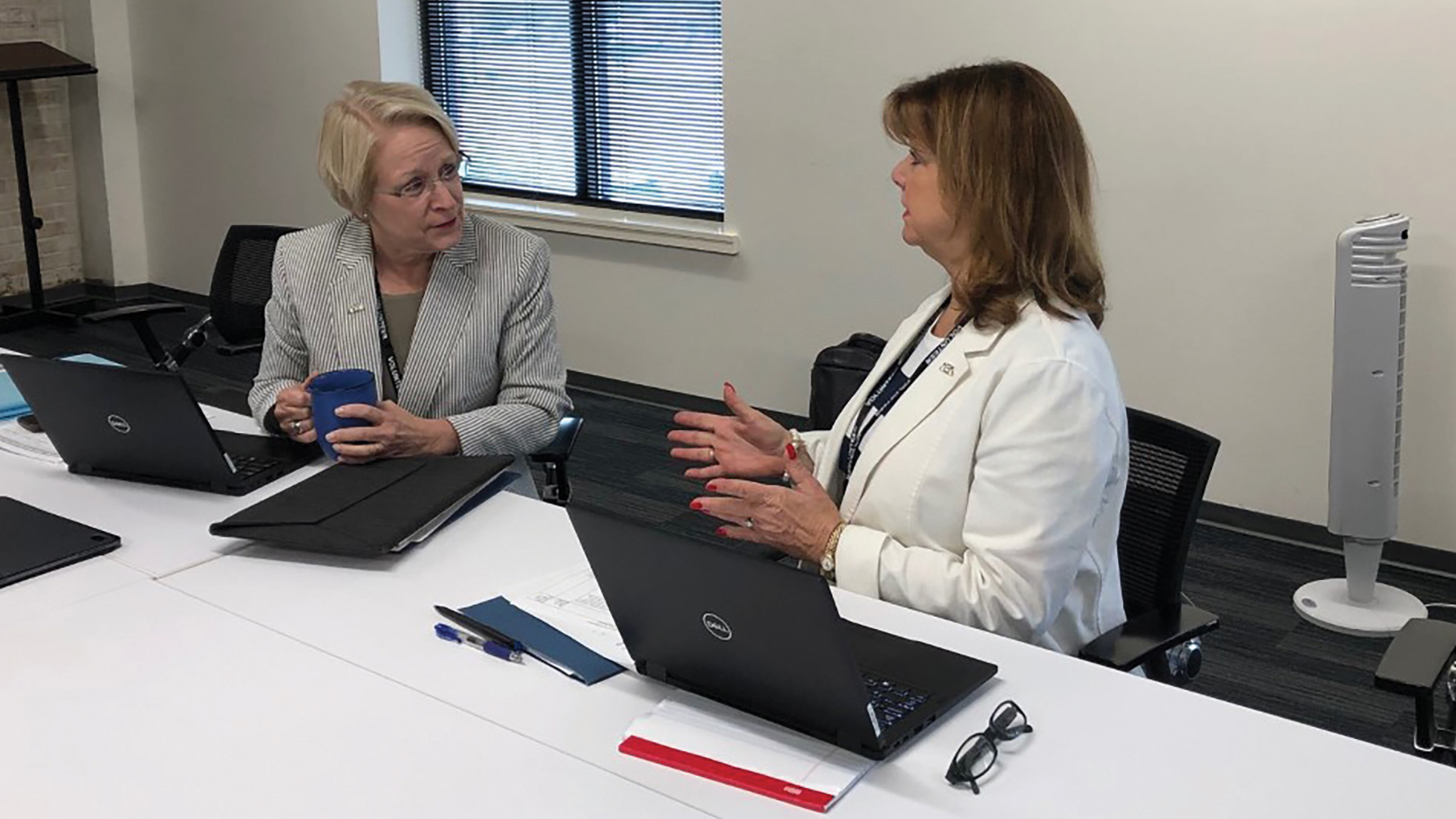 While Martinez was recently assisting at the border, she saw a boy of about eight who went before the court asking for voluntary removal so that he could go back to his country and be reunited with his father, from whom he was separated.

It can take a month, or more, to reunite families. This little boy, who was one of the fortunate few who had counsel, sat with a coloring book and crayons at the table to help him go through the process and necessary proceedings.

“The ongoing impact and harm that’s being absorbed and felt by these children even today was quite visible,” Martinez said. “I observed as children sat and tried to understand a ‘know your rights’ seminar from ProBAR.

“We had more than one child who spoke an indigenous language, so there are significant concerns about having interpreters for countries like Guatemala,” she added.

“Watching young children as they tried to understand—it should cause any person in this country to stop and pause.”

The separation of families policy, Martinez believes, has caused effects beyond any the Trump administration may have anticipated. She said the policy is certainly a deterrent for many who want to come into this country.

“It’s significantly frightening for adults who’ve been detained because they’re fleeing horrors and violence that no one should be exposed to no matter their age,” she said.

“Many have no choice but to turn to our country. And our country is making it very difficult for them to come in and seek asylum under the laws in place and to get an opportunity to go before an immigration judge to have their story told and their application considered.” 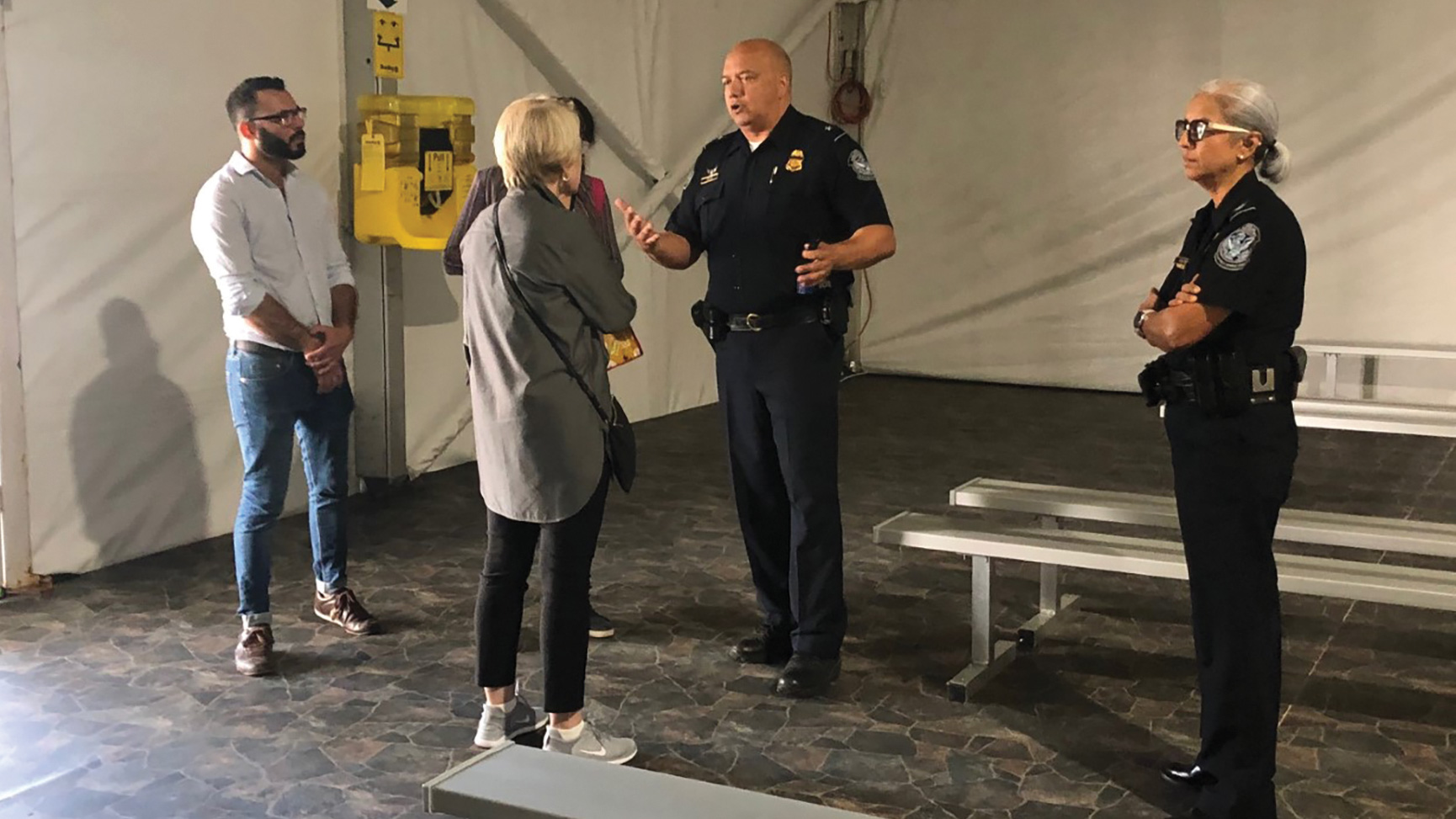 ABA President Judy Perry Martinez tours the new temporary immigration court on the border in Brownsville, Texas, before it opened.

Some immigrants are being turned away and sent back to Mexico as part of the Migration Protection Program. Those immigrants aren’t allowed to stay in the United States, either in detention or not, while they wait for their petition to be heard. A new court is being built at the Brownsville International Gateway Bridge, which is a port of entry in a dangerous area in Mexico where people seeking asylum are sleeping on the streets, or worse, while awaiting a hearing.

Martinez walked across that bridge to hand out hygiene bags to immigrants. They included such items as toothbrushes and toothpaste, washcloths, sanitary napkins, diapers, and soap. She also saw members of a local church bring two bottles of water per person each morning and people in Brownsville who’d cross over to provide food. People were bathing in the Rio Grande River because there was no source of fresh water.

The premise of this program, according to Martinez, is that the Mexican government will provide humanitarian aid. She said she didn’t see any indications that was happening.

“We need to have an ability to assist asylum seekers with ‘know your rights’ type sessions as well as legal services at a place that’s safe and secure,” she said. She added that the area next to the bridge isn’t conducive to an American lawyer walking into Mexico since the area is known to have significant crime issues and a drug cartel presence.

The ABA is in discussions with the U.S. government to set up meaningful access to counsel. That would allow lawyers to meet with clients to prepare those clients and also to meet with them on the date of their hearing to give advice or any other assistance they need.

You can make a difference

“Immigration is an issue that goes to the core of what we’re about, as well as many other pro bono issues on which the ABA delivers,” Martinez said. She recommended students get involved in their school clinics and in ABA pro bono programs.

“My alma mater, Tulane University Law School, has an immigration law clinic; Louisiana has a significant number of detainees,” she added. “As a direct response to that need, Tulane established a clinic to ensure a rich and ready clinical environment accessible to students who have an interest in immigration.”

If your school doesn’t have relevant clinics, Martinez suggests you reach out to your school to request that it sponsor pro bono work you can do in your own community.

Many will be glad to work with you to seek out and help arrange such opportunities.

To help children facing deportation, you can volunteer to research and help attorneys who are offering pro bono work for child migrants. Pro Bono Matters for Children Facing Deportation launched in July and can serve as a good starting point.

Martinez also suggests reaching out to the ABA student representative at your school or the ABA Law Student Division. “Once you experience helping someone, you’ll want to give back again and again,” she said.

The need is nationwide

While there’s a critical need for legal help at the border, Martinez points out that there’s also a demand to help immigrants and asylum seekers in other states.

“There’s an ongoing need throughout the country for pro bono assistance in immigration matters,” she stated. “Typically, people are released from detention on bond and pursue their relief as they set up a life and, we hope, get settled as they await their hearing and decision.”

However, those people aren’t always released. Many stay in detention despite the fact that statistics show a high rate of return for hearings by those who’ve been released.

Translation: This is where law students like you come in. You can help in your own community. Sometimes, detention centers are located remotely, especially in urban areas.

Her home state of Louisiana has the second-highest number of detainees aside from Texas, Martinez noted. But the facilities in her state are in remote areas, which can make it difficult for pro bono attorneys and law students to travel to them.

The greatest need is for Spanish-speaking lawyers and law students because of the current crisis. But many other people who speak other languages or who speak English but need assistance are also seeking asylum.

No matter where you’re located, helping is important, according to Martinez. “It means lawyers can do the job they’re called to do for clients in need,” she said.