The cost of a private law school education has grown by an astronomical 175% since 1985. More than 75% of new or young lawyers surveyed by the American Bar Association reported having at least $100,000 in student loans upon graduation. Worse still, more than 33% of new or young lawyers chose a different career path than what they really wanted because of the debt burden. For Black students, there are more barriers than ever to attend law school and live out their dreams.

I know this struggle well. I, too, incurred a great deal of debt while navigating this process on my own.

The NAACP Legal Defense Fund (LDF) is committed to changing this reality with the launch of our Marshall-Motley Scholars Program (MMSP). This groundbreaking, innovative educational and training opportunity will produce the next generation of civil rights attorneys—50 Scholars over the next five years—to serve Black communities across the South. The program is named after civil rights legends Thurgood Marshall—LDF’s founder and the country’s first Black Supreme Court Justice—and Constance Baker Motley, former LDF attorney and the first Black woman to become a federal judge.

This moment in our nation calls for a full complement of brilliant and dedicated civil rights lawyers prepared to meet the challenges we confront and serve our communities with excellence. The MMSP will identify and invest in aspiring lawyers dedicated to racial justice and for whom pursuing this work in the South is a personal and professional calling.

As a native of Cairo, Georgia, I am quite familiar with the complexities of racism and the stronghold of white supremacy in the region. To overcome this system once and for all requires brilliant lawyers working alongside activists and organizers who have been committed to dismantling the oppressive structures in the South for decades.

Most Black people live in the region and continuously face impediments to voting, education equity, and racial and economic justice. For this reason, LDF’s docket and litigation practice over the last 80 years has always been rooted principally in the South. During the 1960s and ‘70s, we invested heavily in the creation of Black and interracial law firms in the region, providing fellowships and start-up costs for the law practices of some of the most celebrated civil rights lawyers in the region, including former LDF Director-Counsel Julius Chambers, a legend among civil rights lawyers in North Carolina.

Chambers began his time with LDF as our first Legal Fellow, litigating many cases before the Supreme Court, including Swann v. Charlotte-Mecklenburg Board of Education—a critical case that played an instrumental role in integrating U.S. schools—and Griggs v. Duke Power Company, which transformed the nation’s work places. LDF represented 13 Black employees of the Duke Power Co. Dan River Steam Station where they were underpaid and regulated exclusively to labor work. The decision in the led to the Disparate Impact rule, a critical tool in challenging discrimination. 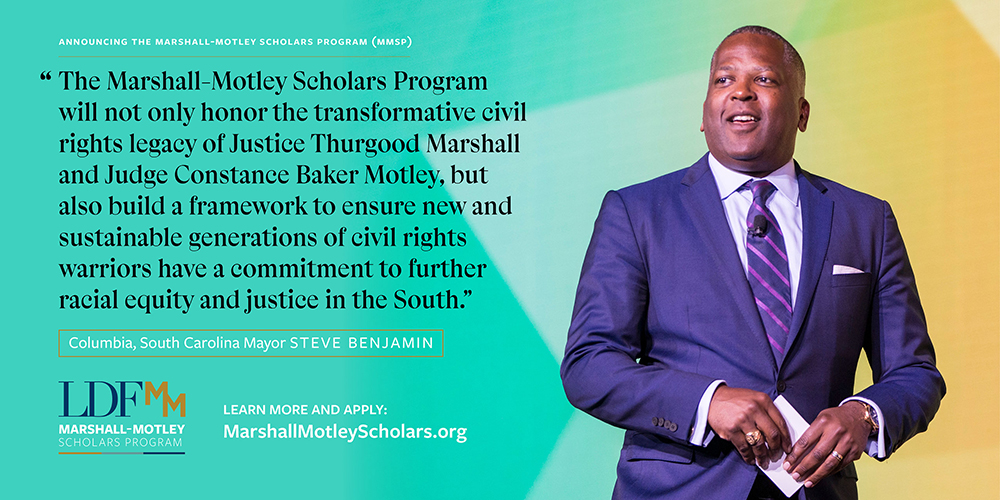 His dedication to equality and justice was shaped by his formative experiences as a boy in segregated North Carolina. A brilliant law student at the University of North Carolina School of Law, where his reputation first caught the attention of Thurgood Marshall, Chambers was LDF’s first Legal Fellow and one of the first two LDF scholarship recipients. The other was Marian Wright Edelman, founder and president of the Children’s Defense Fund.

Chambers was a founding member of Ferguson, Stein & Chambers, the first integrated law firm in North Carolina. The firm, which received support from LDF, became a model for civil rights law firm practice in the private bar. He was a man of tremendous courage. His home and his car were firebombed on separate occasions in 1965, and his office was burned to the ground in 1971, during the height of some of his most contentious civil rights litigation in North Carolina.

Over the years, LDF has supported and helped develop some of this nation’s most legendary civil rights lawyers and leaders. LDF lawyers and cooperating attorneys are among the nation’s most well-respected legislators, judges, scholars, and political leaders. We expect that the MMSP Scholars will themselves become exceptional litigators and advocates and follow in these legendary footsteps. 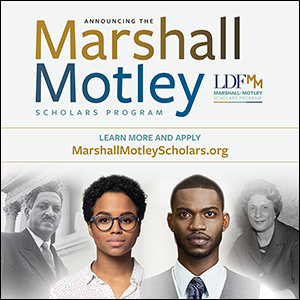 Through the MMSP, we want to leave nothing to chance when it comes to students’ ability to pay for law school and get the highest level of training possible. The Scholars selected to participate in the program will receive:

In return, Scholars commit to practicing civil rights law in pursuit of racial justice in the South for at least eight years following the conclusion of their fellowship.

To learn more about the MMSP and/or apply, visit: MarshallMotleyScholars.o…. 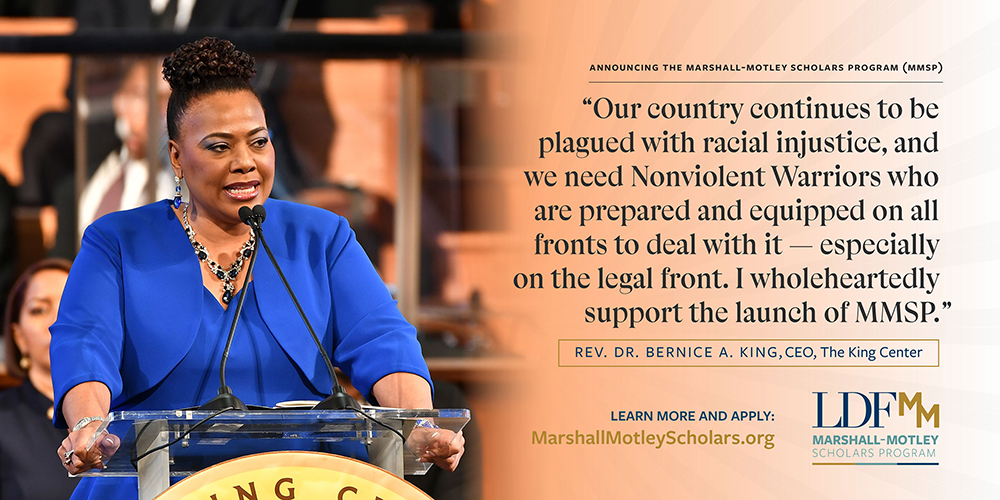